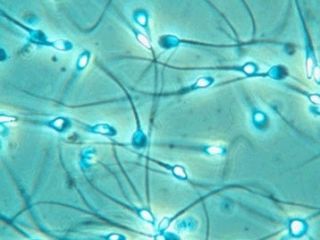 A con man who made a fortune from selling sperm to lesbians over the internet was jailed for fraud, perjury and forgery yesterday.

John Gonzales first attracted the attention of the tabloids when he set up an online sperm donation company in 2003, charging women £2,000 a ‘shot’.

However, Gonzales’ site www.mannotincluded.com (no, it doesn’t work any more) ran into trouble and soon went into liquidation, owing over £220,000.

The spiralling debts didn’t put off ‘Seedy Gonzales’ though, who kept selling sperm online, lying to officials about made-up debts in order to stop having his assets frozen (ahem).

The Sun reports today that, "it is still unclear where Gonzales obtained the sperm," adding that "health experts warned that buying sperm over the internet was dangerous".

"It could be riddled with disease or even come from ANIMALS, Department of Health chiefs said," added the Sun, with its traditional tabloid flourish.

"The site’s first baby, a boy, was born to lesbians Jaime Saphier, 26, and Sarah Watkinson, 31, of Liverpool," the report comments.

The self-proclaimed ‘Stelios of sperm’ also owed £6,000 in back maintenance for his two daughters, claimed his ex-wife.

Gonzales was jailed for 16 months.