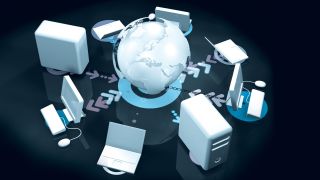 Freedom of the internet is under constant assault from "entrenched institutions and monopolies" and "confused or corrupted" politicians, said the Internet Defense League (IDL).

The new organization has a plan to help prevent controversial legislation like the Stop Online Piracy Act (SOPA) and Cyber Intelligence Sharing and Protection Act (CISPA) from gaining traction, and it involves an internet "bat signal" that will easily enable mass protests.

The IDL is led by Tiffiniy Cheng of Fight for the Future, "a nonprofit working to expand the internet's power for good," and Alexis Ohanian, co-founder of reddit, which touts itself as "the front page of the internet."

By registering with the IDL, anyone with a website can sign up to receive a notification when any internet-threatening legislation rears its ugly head.

"The Internet Blackout was just the beginning," according to an IDL statement.

Along with the note will come the code to embed a warning banner on members' sites that will alert visitors about the harmful legislation, and presumably allow them to easily sign a petition and take other actions.

It began with SOPA

The idea for the registry, which the iDL itself likens to the "bat signal" used to alert Batman when his attention is required, evolved from the mass internet protests and website black-outs that caused Congress to dismiss the overzealous SOPA (Stop Online Piracy Act) earlier this year.

WordPress, reddit, and the Cheezburger network (FAILBlog, Know Your Meme, etc.) have signed up with the IDL, and Wikipedia is reportedly considering membership as well.

Ultimately the list's effectiveness will depend on how many - and which - sites decide to take part.

"Internet freedom and individual power are changing the course of history," reads a message on the IDL's website.

"But entrenched institutions and monopolies want this to stop. Elected leaders often don't understand the internet, so they're easily confused or corrupted."

The site continues, "The Internet Blackout was just the beginning. Together, our websites and personal networks can mobilize the planet to defend the internet from bad laws & monopolies."

The Internet Defense League's current targets are Anti-Counterfeiting Trade Agreement (ACTA) and CISPA, two very real threats that have yet to be squashed.

IDL representatives did not immediately respond to TechRadar's requests for comment.