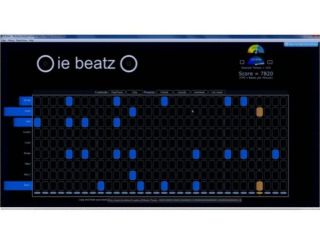 The beta of IE9 is coming in September and the last platform preview adds in the final pieces of the rendering engine (along with fixes for over 100 bugs that have been reported so far).

That brings the Acid score for IE9 up to 95 – and that's where it's going to stop. That's because those last five points would involve implementing two features – SMIL and SVG fonts – that Microsoft has already said it won't (although, interestingly, there are suggestions that both features may move out of the SVG standard and that SVG Fonts might be dropped from the Acid test).

Instead, the new preview adds a demo showing hardware-accelerated animated SVG in a dice-rolling game.

Hardware acceleration is one reason for the performance of Platform Preview 4, which gets an improved score on the SunSpider JavaScript benchmark; it's 11 times faster than IE8 and, notes senior director Ryan Gavin, "in addition to being faster than all current shipping versions of Firefox we are now faster than Safari 5".

The other reason is the new Chakra JavaScript engine, which is now integrated inside the browser rather than running separately and leaving it to Windows to pull the pieces together.

Gavin says this further improves performance, as well as making it easier to program web apps because the browser can work with a description that covers the web page and the code inside it: "There's a clear benefit when you natively integrate the JavaScript engine.

"We're getting the translator out of the way and taking the JavaScript interpreter out of the conversation. In other browsers, this is bolted on and you have to go through the interpreter, and that takes time. By integrating it, we have a fidelity level that's going to be unique to IE."

Another new demo shows off the advantage of accelerating everything on the page using the GPU, rather than just pieces (the approach Firefox is taking). It's an impressive beatbox app, and when IE9 delivers the right number of beats per minute and Chrome doesn't, you can literally hear the difference.

Despite the new high Acid 3 score, Microsoft remains quietly critical of the test.

"Optimising for any one test causes unnatural outcomes. People overgeneralise around one single test that's not reflective of what web patterns developers are building," Gavin added.

"We focus on what developers are building, where things are in the standards process, and by building against those you get the results developers and websites need."

He pointed out that Microsoft has now submitted over 2,000 tests to the W3C covering HTML5, CSS, JavaScript and the new ECMAScript 5 standard for JavaScript that can be used as part of a more comprehensive benchmark for HTML5.

"This is a chance for the W3C and standards bodies to fill a gap where people want to have a test to point to. We have to get out of micro benchmarks and individual tests."