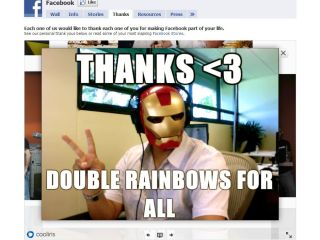 Facebook has announced it has crossed 500m active users – six years after it was first launched.

That number comes after it reached 400m active users in February, showing that the social networking site is not slowing down in terms of popularity.

To celebrate, Facebook Stories is being launched – which is basically a chance for users to write just how great Facebook is and the impact it's had on their lives.

Needless to say, those that made the front page are a touch sycophantic to say the least, but it does have a cool interactive map to see the stories by location.

Facebook has also posted a wall of thanks from its employees – which is cool simply because it uses a neat '3D' interface to scan through.

CEO Mark Zuckerberg took to the stage at the Computer History Museum in the US to talk about the new numbers, he said that the site has grown beyond the premise of other social networks because it's no longer 'cool':

"Think about MySpace. People used it because it was cool and fun. People ask what's going to happen when Facebook isn't cool anymore. But I'm not here to build something cool.

Zuckerberg also stated that Facebook may have made 'some mistakes' regarding privacy settings, but said that changes are still in the pipeline, with things like being able to offer certain privacy settings to certain groups of friends a possibility.