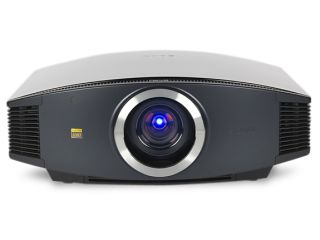 Sony's new VPL-VW85 SXRD projector hasn't even been given an official launch yet (we have to wait until next week's IFA for that) but Home Cinema Choice magazine has managed to get an exclusive look at the system that's set to be the crown jewel in Sony's Bravia projector line-up.

Putting the projector through its paces, Home Cinema Choice found the product looks-wise to be a familiar one for current VPL owners.

"It's immediately obvious that Sony has found a projector design, and is sticking with it. The centralised lens and curved body of the VW85 are certainly familiar," states the magazine team on its blog.

While the outside was recognisable, the inside has been much improved, with HCC explaining: "Sony claims a contrast ratio of 120,000:1 for the VPL-VW85 (double that of the VW80) and we reckon it might not be massively far off, although first impressions are that its peak whites are the real triumph.

"Yes, the black levels seem up to mid-range projector levels, but the brightness the VW85 can achieve really caught our eye."

Overall, the VW85 impressed HCC, who go as far as to say the projector has the potential to be a "barnstormer" and a "strong challenger to JVC's D-ILA models".

Released later in the year, the Sony VPL-VW85 SXRD projector will cost around £5,400. To read more about the projector, click here.