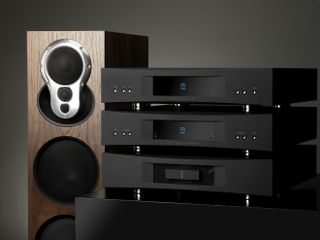 Linn Akurate DS gets a design and performance overhaul

High-end UK audio manufacturer Linn has shown off the latest version of its Akurate system, which boasts a new look and refined specs list.

Linn, a Glasgow-based audio company, has been crafting premium sound systems over 30 years now and its new Akurate system has a number of new updates that offer some serious sound quality.

At the heart of the setup is the Akurate DS, which shows off just why Linn decided to ditch the CD in 2009, in favour of music streaming.

The Akurate DS has been given a whole new master clock which stifles jitter to an absolute minimum.

The audio circuit boards within the device have also been completely overhauled and due to the fact there is no CD or hard drive system to clutter up the insides, Linn's engineers have managed to bring optimal circuit performance to the Akurate DS.

They have also split the audio two ways on the circuit board: DAC and digital. Both are said to accurately reproduce stereo music with very low levels of distortion.

The Akurate System has also been given something of an overhaul. Its enclosure has been redesigned – the first time in 15 years.

The new design has been three years in the making and tries to look very Linn-like, while offering a whole new look.

When it comes to Akurate Control, Linn is offering more control to its users, with the analogue stereo pre-amp using the latest Linn switching technology and improved isolation to clean up sound.

Essentially, if a port is not being used then it will not have any power sent to it, reducing distortion and the like.

As always Linn has tailored its setup to the long-term upgrade, telling TechRadar that it has made its systems as open as possible so users can use each component how they want to use them.

The final tweak is with the aesthetics of Linn's Akurate 242 and 212 loudspeaker range. Linn's active speakers now have over 200 high gloss finishes to choose from.

So even if your house is pretty in pink, there should be your style catered for.

For pricing and more information on the update range, go to www.linn.co.uk.