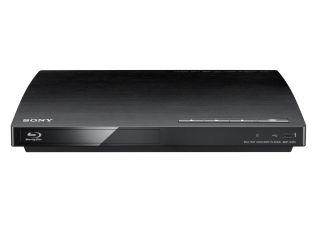 The Sony BDP-S185 Blu-ray player has been announced, offering up a cheap, eco-friendly box with BBC iPlayer and Bravia Internet Video.

The BDP-S185 uses 47 per cent less power than its predecessor, and the 'affordable' player brings apps that include the iPlayer, Lovefilm and Sky News.

There is, of course, Sony Entertainment Network functionality and it sports a USB port.

"The BDP-S185 Blu-ray Disc Player is ideal if you want to take a first step into the future of entertainment at an affordable price," says James Forrester, Category Marketing Manager, Sony UK.

Also unveiled at IFA 2011 is the SMP-N200 Network Media Player, allowing people to turn any television into a connected TV.

"The SMP-N200 Network Media Player will change how people experience entertainment at home," added Forrester. "It's an easy way for everyone to enjoy Internet TV.

"With streaming speed and quality constantly improving, you can discover a limitless world of online channels, music and movies on your TV screen with no need for separate entertainment devices."

You can check out video of all the best Sony products on show at IFA below: