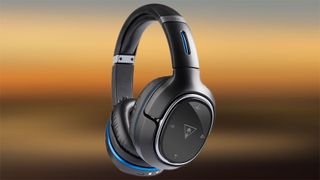 The sweet sound of surround

One of the leading brands in the video gaming headset business is getting a jump on this week's Electronic Entertainment Expo (E3) by introducing new cans targeted at owners of Sony's latest console.

With a range of surround sound modes for games, movies or music, Elite 800 features active noise cancellation along with DTS for what the company calls an "immersive audio experience" that marks a first for console gaming headsets, part of a deal with Sony announced earlier this year.

Whether listening to music or taking phone calls, the $300 (UK£189, about AU$321) headset is capable of being controlled via Bluetooth by a mobile app for up to 15 hours of playing time on a single charge through a low-profile, magnetic charging stand.

Gamers who purchase any Turtle Beach headsets will have the opportunity to enroll in the company's Elite Membership Program, which offers discounts, extended warranties and early access to the latest product information.

Aside from Ear Force P12 which launches globally on July 10, all of the manufacturer's E3 products will land in retail stores sometime during the second half of this year, at which point Turtle Beach Chief Executive Officer Juergen Stark promises "a whole new game for PlayStation console owners."