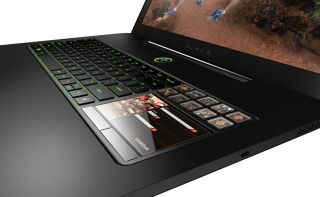 Peripheral manufacturer Razer has revealed the mystery behind its "PC gaming is not dead" campaign by launching a new high-end gaming laptop, the Blade.

The company has brazenly declared the 17.3-inch Blade the "world's first true gaming laptop", which comes complete with a 2.8GHz Intel Core i7 processor and 8GB of DDR3 RAM.

The laptop comes with the innovative Switchblade User Interface, which features a multi-touch LCD screen and 10 dynamic keys, both positioned to the right of the laptop.

Razer, which is more famous for its range of gaming peripherals, has lambasted the current roster of PC gaming laptops from the likes of Alienware and VoodooPC for a lack of innovation.

Razer CEO Min-Liang Tan told Ars Technica: "Today,there hasn't been a single PC laptop that anyone has been passionate about for the longest time.

"It's not because there's no innovation, but [because] the big PC guys just don't want to innovate anymore."

The Blade laptop will launch before the end of the year and the US price is a staggering $2,799. A UK price is yet to be confirmed.