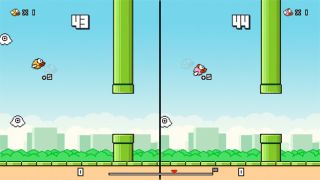 Flappy Bird, the hit mobile game which caused a bit of a storm when the developer withdrew it at the peak of its success for being too addictive, is back, but right now appears to be an Amazon exclusive.

This time you can get your mates involved as there's a versus mode to enjoy, while floating ghosts will also obstruct your progress as well as those Mario-esque pipes.

Developer Dong Nguyen also promises this version will be a little less addictive than the original.

Nguyen, who had sleepless nights over how much time people were spending playing the game, has pledged to offer players satisfaction after a few turns rather than hours of gameplay.

There's no news yet on whether the game will be available for iOS or Android devices.