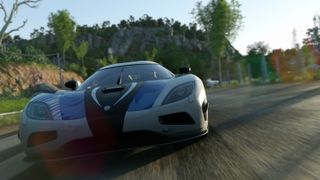 October 7: put it in your diaries

Evolution has spent a lot of time waxing and polishing Driveclub to perfection, and the result is an engine that the studio believes will see out the life of the PS4.

At a tour of Evolution Studios this week TechRadar got to take the game for an early test drive and chat to the developers about the game's souped-up, new-gen engine.

"For Driveclub it does a good job. By the end of the PS4 life cycle it's going to do a brilliant job," said Driveclub art director Alex Perkins.

From the tarmac to the clouds, Driveclub achieves a mind-boggling level of visual detail and authenticity - even maxing out all the settings at 30fps, we found the game ran just as smoothly - and the plan is to only keep pushing.

Perkins said that there was the possibility of taking the Driveclub engine beyond the track to one day let us explore and fully appreciate the game's rich off-road environments.

"As the engine ever evolves, there's no reason we can't start opening this stuff up."