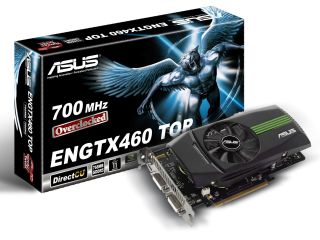 Asus has announced its new graphics cards to take advantage of Nvidia's 460 GTX GPU - with the Asus ENGTX range promising to be just the job for a 3D gaming rig.

A slew of cards have been or will be announced that use the new 460 GTX chip, and Asus has announced four flavours.

That means, as you may expect, an overclocked and non-overclocked versions of the 1Gb and 768, with the former labelled TOP.

"ASUS is proud to deliver technology that goes further than base reference requirements with exclusives such as DirectCU thermal design, Voltage Tweak overvolting and endurance features GPU Guard, EMI Shield and Fuse Protection.