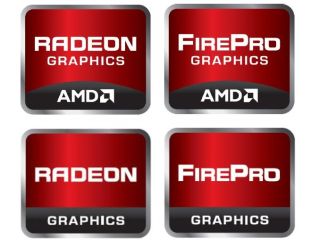 AMD has decided it's time to put ATI firmly in the bin. The chip manufacturer bought graphics giant ATI back in 2006 and has traded off the name ever since.

However, the Phenom-maker has now decided that it's time for AMD to take over completely and the Radeon graphics brand will now be proceeded by the AMD name, though the red colour will be retained.

In a conference call with TechRadar, John Volkmann, vice president of Strategic Communications at AMD said that "we've looked very hard at is the role of the ATI brand. We [previously] chose not to change for very good reasons.

"[Now] do we have permission to do that? Our partners and our customers also have a role to play."

But as well as a Radeon logo featuring the AMD logo, there is also a plain logo that just features the words Radeon Graphics.

"That's for anyone in our system who doesn't want to take the hard cut over the AMD brand" explains Volkmann.

"Some [partners] say they would prefer a transitional strategy, a two step process. We fully expect to transfer everybody to the [AMD Radeon] logos," continues Volkmann.

But the AMD slide deck shows a brand treatment alongside an Intel Core logo – no AMD branding is present aside from the word Radeon – surely a strange move?

Volkmann was bullish when talking about the move. "When it comes to our brands the ATI and Radeon brands are equally strong.

"Secondly we learnt that the combination of AMD and Radeon is stronger than ATI and Radeon," he continued.

The change will happen with all new products – older cards will still have the ATI branding. AMD carried out research in seven territories (including the UK) when deciding about the brand.

"In our minds the timing couldn't be better," he said. "Our AMD graphics business [is] executing well, culminating in AMD recently taking overall leadership in discrete graphics market share.

But what about the partners? "We view the decision by AMD to consolidate under one brand as a good move," says Adrian Thompson, responsible for international marketing at Sapphire Technology. "It will ultimately lead to broader recognition of AMD as a CPU and GPU powerhouse."

Eddie Memon, senior VP of marketing at XFX says that they did have some reservation about the move. "AMD then shared with us the extensive market research that supports this initiative and we now view the transition as an important step in establishing an even stronger worldwide brand."