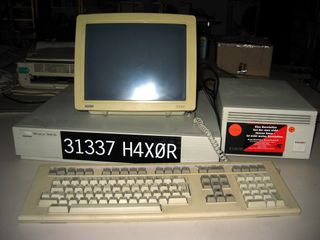 Media server, hardware firewall, or in the case of this old beast, the recycling centre

Are you looking to trade in your old PC for the latest all-singing, all-dancing model? If you haven't yet earmarked it for a role in your household, don't rush to bin it: we Britons produce over 1.8 million tonnes of electric and electronic waste every single year, and even if you don't care about the environment per se, we're fast running out of landfill space.

Here are 20 different ways of finding a new role for your old PC or disposing of it responsibly, either to raise a small amount of cash or to provide someone else with the opportunity of using it. We'll cover everything from turning it into a backup device, a moving photo frame, or a vintage games machine, to looking at other ways of offloading it at little or no effort for yourself.

1. Use it as a video recorder

Many modern TV tuner cards, such as the Hauppauge WinTV GO-Plus, only require a 100MHz processor to play live TV, although your chip will need to be capable of around 700MHz if you want to use your old system as a video recorder, too. If it's up to scratch, then you can record shows at DVD quality, plus schedule recordings by using online programme guides. TV tuner cards are supplied with software to play and record live TV in Windows, but you'll probably want to watch shows over a TV rather than a monitor. Microsoft Windows XP Media Center Edition would ordinarily be the best option for this, but you can't buy it on its own and your old PC won't be able to cope with it anyway. Thankfully, there are alternatives. If you want a freebie, try MediaPortal or check out either ShowShifter (£30) or SageTV ($80, around £40) – all designed to work on a TV screen.

2. Help find a cure for cancer

Distributed computing is one of the most philanthropic uses for an old computer. Essentially, it's for scientific projects that require a huge amount of processing power to crunch the reams of data they generate, such as analysing DNA to help find cures for diseases such as cancer, or reports from space telescopes scanning interstellar static for signs of alien life. A computer signed up to one of these projects receives data to analyse over the internet and then dedicates its spare processing cycles to the task.

3. Make some money from it


Old PCs lose value at an incredible rate, so if you do have something to sell, don't sit on it. If you have a component that's relatively rare, you might be able to fetch a few bob for it on eBay. Your best bet for getting slightly more than the pitiful online rate for a second-hand system is to advertise in local newspaper classifieds and the like, because their audience is a lot less tech-savvy than eBay's. As a result, you might be able to get a higher price for your old equipment.

Why not bequeath your dear old computer to your dear old great-aunt? Never mind that it can't play back high-def video, as long as it can browse the web, display digital photos and run a word processor. For a beginner, it'll make the perfect entry point to the world of everyday modern computing.


According to a UN study, the manufacture of a new computer and monitor uses 240kg of fossil fuels, 22kg of chemicals and 1,500 litres of water. To make matters worse, the government estimates around 1.8 million tonnes of electrical and electronic waste is generated every single year.

That's an awful lot of material, so it makes sense to keep as much of it out of landfill as possible.