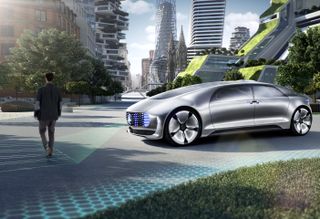 Will somebody think of the crash test dummies?

Now, autonomous cars are inevitable, so the benefits of what that will bring are starting to become 'a thing' to be discussed.

But before we talk about an end to road traffic accidents, let's recap on where we're at now…

The path to fully autonomous vehicles will be long and littered with iterations, so firstly we'll see features trickling through for the most part, but there's also some very exciting things happening.

Self-park is already a feature on a lot of cars out there – it's filtered down to the likes of a Ford Kuga for example – and this is indicative of how you'll see things coming through the pipeline that will slowly get consumers used to the idea that their cars will do a lot more of the actual maneuvering in the years to come than they do now.

You can get lane assist that will make a noise should you start to drift into another lane, road sign recognition, auto-braking if you get too close to another vehicle, and so on. All of these things are preparing us as consumers, and paving the way to the future.

It seems that people buying into Tesla's way of thinking are much more open to the idea of that future – having their cars doing more for them – than most other car buyers right now.

The Model S combines a forward looking camera, radar and 360 degree sonar sensors with real time traffic updates to automatically drive on the open road and in dense stop and go traffic. You can also change lanes simply by tapping the indicator, and when you get to where you're going, it'll find a parking spot and park in it for you. All of which is pretty amazing, so stop, take a breath and think about that for a moment…

So features are filtering through, but some at a more rapid rate than others.

But what of actual autonomous vehicles?

As you'll no doubt be aware, Google is ploughing a lot of time and money into its autonomous vehicle research, and have some vehicles running around on the roads right now driving themselves.

They've had a lot of press coverage for that, and there's also been a lot of noise about Apple getting in on the act too – although as is the way with Apple and the media scrum around them, no one has an actual real clue what they're up to. So we'll ignore that that's happening for the purposes of this.

But it's the quiet player, Volvo, who are doing what everyone else is talking about, and its XC90 is shaping up to be an autonomous vehicle how you imagine it to be. And Volvo says that it plans to have 100 of them on the road in 2017.

That's quite some achievement.

Using 28 cameras, sensors, lasers and radar units, the XC90 will be able to do everything that you or I can do in a car, short of talking crap and drinking a Starbucks. Volvo says that the system is reliable enough, 'to take over every aspect of driving in autonomous mode', which means that it can accelerate, brake, steer, read signs and drive in flowing traffic.

Normal people will be able to get their hands on one of these for the world's first large-scale autonomous trial the year after next, so it's literally about to happen.

And you should remember when it does because it will be a halo moment for the humble automobile.

Ultimately all of these developments aren't to make drivers more lazy, and they're not to take the fun out of driving, but they are designed to make everything safer – which is why Volvo is currently leading the way.

Collision controls, auto-braking, lane-changing… everything is there to stop your car from hitting someone else's.

Head Up Displays and Augmented Reality will also start to play a bigger part of this as the technology develops, using areas of the cabin that we at the moment take for granted are for just one thing, but using the space to make our driving experience hyper real.

Take for example MINI's AR goggles idea. Although making you look like a prize buffoon, the idea behind them is sound – they make parts of your car 'see through' so that you no longer have blind spots.

HUD windscreens also offer the potential to point things out to your that you might otherwise not be aware of, such as a deer bolting through a field towards you at night – it could highlight this with a warning icon on our actual windscreen, pointing to where the deer is about to explode through a hedge in front of you.

So theoretically collisions can be stopped, yes, it will happen, but it's going to take a lot of work. More even than getting autonomous vehicles on the road and overcoming all of the red tape that will involve.

For cars to stop smashing into each other, drivers need to be taken out of the equation. All cars will need to talk to each other in some way, and to a city's infrastructure, so that they can work out where they all are and to then avoid each other.

The automatic braking will come into play, the sensors and cameras will be key, and you the driver will just have to sit back and trust that it all knows what it's doing.

So, can we ever stop collisions? Yes. But probably not in yours or my lifetimes.