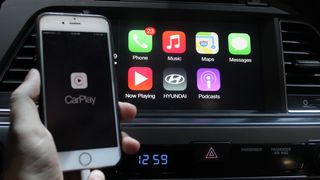 Like the Apple iTV before it, the Apple Car is the new rumour that just won't die.

Now Bloomberg is reporting that Cupertino hopes to begin production of an electric car by 2020 according to "people with knowledge of the matter."

That's a fast turnaround, particularly for a company with no previous automotive experience – automakers normally spend five to seven years on car development – but Apple is well known for pressuring its teams to meet tough deadlines.

Apple is rumoured to have 200 staff dedicated to the project, which was previously reported to have taken on the codename "Titan."

The move would see Apple lining itself up to compete with electric motoring's big hitters Tesla and General Motors, both of which have 2017 deadlines for vehicles that will travel 200 miles on a single charge and cost less than US$40,000.

Despite the rumour's persistence, the motoring industry remains unshaken. Mercedes-Benz chairman Dieter Zetsche dismissed the rumour, saying a move from Apple into motoring is as likely as a Mercedes-Benz smartphone.

Whether it reaches production or not, an Apple Car is something we'd definitely like to see. If only to satisfy our curiosity.