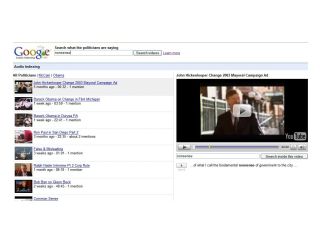 So, it's true - politicians do speak nonsense

Not content with ruling the search world in terms of words, images and videos, Google has announced a new audio search service called Gaudi.

Although it has been trialled for the last two months on iGoogle, the service is now up and running for video supplied to YouTube's political channel.

Straight from Google Labs, Gaudi trawls video content on the web and, with the use of speech recognition, looks for instances when your search term is muttered.

For instance, type Google and it will find all videos where Google is talked about on the political circuit.

The service may be early doors, but a quick trial shows definite promise. Working together with video search, it does also throw up videos of your search term where the word isn't said, but these are clearly marked.

On its blog, Google says about the Gaudi: "The dedicated site offers more features, such as 'search within video' and 'sharing', and a more robust user interface." What it fails to mention is probably the best feature of the lot – that you can automatically go to the point in the video where your search term is said.

Although Gaudi is only available for political speeches, the company hopes to roll out the technology to all videos in the near future.