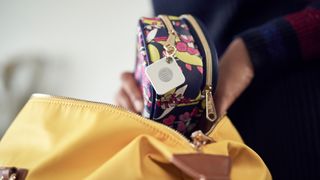 That’s the name found on a folder by 9to5Mac inside the latest version of iOS 13.2, which was released today at the time of writing. Apple hasn’t made any announcements (yet), but given the name and folder location came included with the latest operating system update, we can only guess that the company will formally introduce its product soon.

Supposedly, the AirTag will be able to be paired with an iPhone just like AirPods and enable owners to track their 'AirTagged' item via the Find My app.

The folder contained placeholder asset images of other Apple products (AirPods, HomePod, etc), so there’s no sneak peek of the AirTag yet. There are, however, videos inside the folder named  “Battery Swap,” suggesting a feature or capability to swap out the AirTag’s battery, according to 9to5Mac.

Months of tracker rumors coming to a head

The first hint of an Apple tracker device was found in an early iOS 13 beta back in June, when iOS developer Steve Moser discovered a code string named ‘Tag.’ Later builds of iOS 13 included mention of an accessory that would help you “Tag your everyday items” and “never lose them again.”

That code laid out how Find My would work with the Apple tracker: once the app detects you’ve been separated from an AirTag, the accessory will start beeping, unless you’ve set up “safe locations” like home or work where you’re expecting to leave your AirTag-connected devices astray.

That’s also where hints of the “lost mode” surfaced, which would let you ask other iPhones to ping the missing AirTag and help track it down. Lastly, there was  an augmented reality aspect to Find My that guided you toward lost items using an overlay on top of a live feed from your cameras.

To its credit, Tile heard about Apple's upcoming rival products – and its message is "bring it on," Tile Chief Experience Officer told TechRadar. We’ll have to wait and see which of these predicted features and capabilities pulled from the code made it to the final product if, and when, Apple formally announces the AirTag trackers.