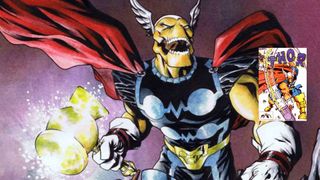 That's right, Marvel TV shows on Disney Plus. Scorsese and Copolla may not be chomping at the bit to subscribe to Disney’s new streaming service – which has now launched in the US, Canada, and the Netherlands – but the rest of us can’t wait to binge this new franchise-heavy goliath. Marvel fans in particular have good reason to be excited, with TV spin-offs incoming for some of its most well-established characters.

The Falcon and the Winter Soldier, featuring the titular Avengers stalwarts, is expected to drop first, to be followed by sitcom weirdness with WandaVision, and then a Loki miniseries and the animated What If...? after that. Fan favourites She Hulk, Ms. Marvel and Moon Knight are also in development for the small screen too.

But given the rich pickings offered by Marvel’s storied history, there’s plenty of other, perhaps lesser known characters, who are worthy of TV development – not to mention the comic book characters from Disney's acquisition of Fox.

But what Marvel TV shows should Disney make? We’ve thumbed through our comic catalogues to decide which other Marvel characters deserve the Disney Plus treatment (no easy task). So who made our wish list? Read on to discover the Marvel characters we feel deserve a shot at streaming glory...

If any Marvel character deserves the Disney Plus spotlight, it’s Namor the Sub-Mariner. One of Marvel’s oldest characters (along with Toro, the original android Human Torch), this Lord of the Deep was created by writer artist Bill Everett back in the thirties, making his debut in the first issue of the presciently titled Marvel Comics – back when the publisher was called Timely.

Namor resurfaced as an anti-hero in the Fantastic Four during the early Sixties, wherein Stan Lee turned him into a love rival for Invisible Girl Sue Storm – who at the time was dating Mr Fantastic himself Reed Richards. Namor duly flipped and flopped like a beached flounder between hero and villain for years.

With Aquaman a decent hit for rival DC, a TV promotion for Marvel’s fin-heeled water-breather would make a lot of sense. With strong ties to more familiar characters – Namor was an original member of the Defenders, alongside Dr Strange and the Hulk, and fought alongside Captain America in The Invaders – he’s an iconic member of the Marvel universe we’d love to see on Disney Plus.

The first alien to wield Thor's hammer, Beta Ray Bill was created by Walter Simpson in the Seventies and immediately became a cult hit. Bill eventually traded the Mjolnir hammer for the enchanted axe Stormbreaker, and evolved into a cosmic superstar in his own right.

With a distinctive horse-head skull, Beta Ray Bill has strong ties to both Asgard and the Guardians of the Galaxy (there are Beta Ray Bill Easter Eggs in both GOTG and Thor Ragnarok), making him a great addition to Marvel’s cosmic cast. Thanks to current CGI, there also shouldn’t be a problem helming a live action show – though the character has previously appeared in Marvel’s cartoon outings.

Yee-haw! Kid Colt is Marvel’s longest serving cowboy hero, having been quick on the draw and sore in the saddle for the best part of three decades.

OK, we know what you’re thinking. Why would Marvel fans want a rootin’ tootin’ cowboy in their streaming TV universe? Well, for one thing, the Kid has already galloped into superhero territory, with comic book cameos alongside the Avengers, Black Panther and Fantastic Four.

We also know that Kevin Feige likes to think outside the box. Imagine a western TV show bolstered by other Marvel western comic book characters, such as the original Ghost Rider and the Rawhide Kid, with clever ties into the MCU – perhaps discovering discarded Kree junk or Asgardian flotsam in the Arizona desert? Throw some time travel in for good measure, and we’re sold! The time is right for Kid Colt to ride again…

With The Eternals looking to be one of the biggest movies on Marvel’s Phase Four roster, we reckon the time is right to reboot Machine Man. Another wildly inventive Jack Kirby creation, Machine Man is a sentient robot looking for acceptance in the modern world. Striking the right note as a metaphor for our intolerant times, a melancholic AI twist could make his story surprisingly inclusive. He also has extendable arms.

The final issues of his comic run saw Machine Man disassembled – in the year 2020, no less – and his parts discarded thanks to an admin error, only for him to be rebuilt as a figurehead for the impending machine rebellion. Sign us up now!

Introduced as a villain, then promptly killed, in Avengers issue 9 – a surprisingly moving early Avengers yarn – Wonder Man was to find redemption as a fully-fledged hero a decade later as a founding member of the West Coast Avengers. (Stan Lee has suggested that DC lost interest in litigating the character, because it had Wonder Woman.)

This party-loving dude makes use of his superhuman strength and invulnerability to pursue a career as a part time actor and stuntman. Well, you would, wouldn’t you? The only downside to his high octane lifestyle is that his eyes glow red – but we reckon Wonder Man has the makings of a really fun superhero show.

DC’s Swamp Thing might have been ignominiously cancelled after just a single episode stateside – a shame, as the show is a top-notch horror-fest – but Marvel’s own muck monster could fare much better.

As written by Steve Gerber, Man-Thing is less about horror, more about weirdness. A stablemate of Howard the Duck, this shambling creation is drawn like a moth to flame by emotion, while his bog is a multidimensional portal. Consequently Swampy acts as a fulcrum for a rich array of characters, and genres, including Conan homage Korrek, Warrior Prince of Katharta.

Like Endgame baddie Thanos, we think Man-Thing is inevitable. If he doesn’t slime up in Howard the Duck’s upcoming Disney Plus animated series, we’ll eat our tail feathers.

Now that Blade is back in the frame, with Mahershala Ali wearing the Day Walker’s fangs, surely it’s time to start petitioning for other Marvel horror stars to make the transition from page to screen? In our eyes, none are more worthy than Jack Russel. The printed adventures of Marvel’s lovable shape-shifting lycanthrope combined traditional horror tropes with Marvel’s wider costumed universe, seeing the werewolf in question battling Dracula one minute and Captain America the next.

Jack’s werewolf mythos, which is also entwined with Moon Knight, Tigra, Ghost Rider and Man-Thing, is open to interpretation, and could be a snarling good edition to Marvel’s Disney Plus canon.

Few Marvel fans will have missed the Braddock Easter Egg in Avengers: Endgame, and hopes have been high ever since that Brian Braddock, aka Captain Britain, would soon make his debut in the MCU.

Created as part of the company’s UK-centric comics invasion back in the Seventies, the character is empowered by Merlin (aka Merlyn) magic, conveniently bringing the mythology of Camelot into the Marvel melting pot. He’s also a natural foil for Black Knight (to be played by Kit Harrington in the Eternals).

Braddock eventually goes on the front Excalibur, a UK team inspired by the X-Men. With a mythic backstory, suitably distanced from the rest of Marvel’s US stable, we think there’s plenty of UK anchored action to be had.