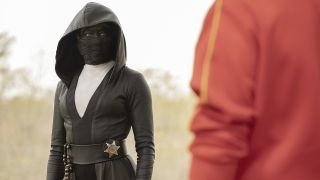 We’re living in a golden age for depictions of superheroes and other comic book stories on TV. Plenty of small screen adaptations of popular characters have been made over the years, from early Superman serials through to Smallville in the '00s, but the variety of shows we can watch today is unprecedented. That’s why we’ve compiled a list of ten of the most unusual, most interesting and most entertaining superhero shows, with most entries on this list available to stream right now.

We’ve tried to offer a variety of experiences, from prestige cable shows, to episodic network shows and even comedies. And don't worry: we've included animated shows, too. There's no way we were going to do this list without including the legendary Batman animated series, which is arguably still the best version of the character outside of the comics.

When we first heard there would be an adaptation of Watchmen, we were dubious: attempts to milk further content from Alan Moore’s magnum opus have rarely gone well. Yet HBO’s Watchmen succeeds because it feels distinct and different from the original comics. A big part of that is how heavily it focuses on the themes of race and racism, most impressively when it delivers an origin story for the first of the Watchmen universe’s vigilantes, Hooded Justice. We ultimately chose it as the best TV show of 2019.

The best time to watch superhero antics on TV is right now, but the second best time was the early 1990s, when the incredible Batman the Animated Series was on the air. It’s hard to overstate just how influential this portrayal of Batman is: it literally created Harley Quinn. If you ever wanted to explain Batman to someone, show them the intro sequence from this show, a fantastic minimalist introduction to the character in an beautiful art deco style. The remastered Blu-ray, released a couple of years ago, is the best way to enjoy it in 2020.

Watch it on: Netflix

Like Doom Patrol, The Umbrella Academy is essentially an X-Men deconstruction, but this time it is focused on the idea of kid superheroes growing up, and realizing just how much their mentor and surrogate father messed them up. Based on a 2007 comic co-created by My Chemical Romance frontman Gerard Way, it adds a much more modern take on the idea of a team of outcasts and weirdos. Umbrella Academy season 2 is coming later this year.

Watch it on: Amazon Prime

The Boys is essentially about superheroes existing in the real world, who are monetized by a big corporation. They behave as appallingly as they like – until they cross the wrong victims. This is an adaptation of the Gareth Ennis-created comic of the same name, though it sheds some of the source material's excesses for the better. Karl Urban's extremely fun cockney-or-is-it-Australian Billy Butcher, who hates 'supes', as he calls them, gives this show some real laughs. But it's not just blood and swearing that makes The Boys such a great adaptation: the relationship between Starlight, the newest superhero on the scene, and Hughie, who's among Billy's anti-Supes allies, is the heart of the show. The Boys season 2 will be released this year.

Watch it on: Netflix

Oh the Marvel Netflix-verse, we hardly knew ye. Starting in 2015, Marvel and Netflix collaborated on a series of noirish, “street level” prestige TV adaptations based around a series of New York heroes. Optimism was high, but quality was mixed (seriously, do not watch Iron Fist). Jessica Jones, especially the stellar first series, is the pick of the bunch, cleverly mixing feminist themes into a story about a mind controlling villain (David Tennant) and a hard drinking PI (Kristen Ritter) who is still traumatized by him. The series is worth watching for Ritter’s sardonic yet deeply human performance.

Look, hear us out, okay? The first season of Legends of Tomorrow is not good, and you should skip it, but somewhere near the start of season 2, the show – an ensemble made of the spare characters of the Arrowverse – threw out every rule except 'have fun'. This is a show in which Vikings once conquered America because a time traveling Furby told them to. It’s a show where a psychic gorilla tried to murder Barack Obama while saying, “It will be almost an honor to kill you”. Legends operates on pure 'why the hell not?'

Watch it on: DC Universe (US), Starzplay (UK)

Loosely based on acclaimed comics writer Grant Morrison’s run of comics about the titular team, Doom Patrol is essentially a version of the X-Men which leans hard into the “freaks and outcasts” bit. Really hard. Every character’s powers have horrible downsides, like a man in a robot body who can’t feel anything (Brendan Fraser) or a woman with stretchy powers who struggles to hold herself together (April Bowlby). Like Legends, Doom Patrol lives on the weirder, more self aware end of the superhero spectrum, but where Legends is relatively family friendly, Doom Patrol really isn’t.

Watch it on: DC Universe (US), Amazon Prime to buy (UK)

Running for two seasons back in 2010, but unexpectedly resurrected last year, Young Justice depicted a huge ensemble version of the DC Universe from the perspective of its teen heroes. Co-creator Greg Weisman, who also made Gargoyles, specializes in 'kids show that is way more mature than you expect' and dutifully focuses in on human (and alien) drama and sophisticated enemy plots. The best little touch is its depiction of a Superman who kind of sucks at being a father figure, while Batman is surprisingly good at it.

Watch it on: Amazon Prime

There are lots of funny shows on this list (seriously, Legends of Tomorrow is ridiculous) but no outright parodies. Attempts to do comedy superhero shows often fall flat (remember Powerless? No one does). The Tick stands head and broad shoulders above such attempts, it’s actually been adapted three times, once as animation, twice as live action, with the most recent one, starring Peter Serafinowicz, ending last year, in which creator Ben Edlund takes a slightly darker and more serious look at the comedy character.

We’ve described several shows in this list as “weird”, but most of them are weird in a wacky, goofy way, Legion is weird in a more serious, Lynchian way. It presents its narrative, the story of Professor X’s incredibly powerful, mentally ill son, in an often confusing and surreal manner. At times it is deliberately alienating. It's a “challenging” show to watch in a way no other show on this list really is. All the shows on this list are telling their stories in prose, but Legion attempts poetry.