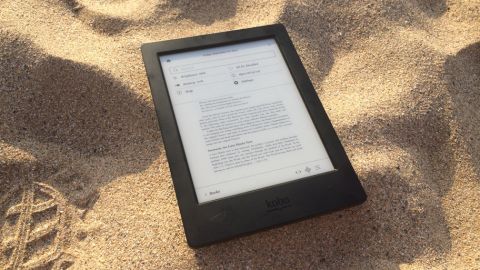 Bookworms on beaches and in baths can relax at last with the first fully waterproof e-reader. But the Kobo Aura H2O lacks the processing power to be irresistible and has limited media options.

Does an ereader need to be waterproof? Since Sony made its Xperia devices waterproof it was only a matter of time before this impressively practical approach hit every other gadget and where better to get your feet wet than with an ereader?

It's more likely to spend time in a bath or near a swimming pool than a smartphone. Kobo's latest, the Kobo Aura H2O, isn't cheap with an RRP of £139.99 (about US$244, AU$255) at the time of writing, but its ability not only to withstand moisture but to work just as well underwater as above it is unique. Why did no-one think of this before?

The Aura H2O is Kobo's best ereader yet. It's essentially an upgrade on the Kobo Aura HD, with the same sized 6.8-inch screen. However, this incarnation has a lot of improvements.

The first is its IP67 certification, something that makes the Kobo Aura H2O completely waterproof. I'm not talking 'water resistant' or other kinds of marketing blabber, but proper, solid waterproofing that means it can actually be left under 1 meter of water for up to 30 minutes.

Page turning and general functionality will still work in baths, rivers, and even in the sea.

The waterproofing comes largely from a cover on the bottom that keeps the Kobo Aura H2O's ins and outs dry. These ins and outs include a microUSB slot for charging its two-month long battery, and a microSD card slot that can increase its built-in 4GB capacity by a further 32GB.

Despite the Aura H2O's aquatic reputation, it still feels the need to proffer a "water on your screen?" warning whenever a drop of rain/splash/wet hands touches its screen.

This is a hangover from previous versions, and since it makes no difference to the health of the Kobo Aura H2O, I turned-off this recurring message in the settings menu.

It uses a 6.8-inch touchscreen e-ink Carta display that has a resolution of 1430 x 1080 pixels that achieves plenty, thanks to 256 pixels per inch.

However, even with the screen Kobo is trying to appeal more to beach bums than spec-watchers. Its display has an anti-glare coating and, as well as being waterproof, the design is also dust-tight.

So no more worries about getting sand in your ereader, though all of this only applies if you keep the flap on the bottom shut.

The H2O also has some clever edge lighting to create enough subtle illumination to read in the dark, without tablet-like brightness. Five LEDs along the bottom – invisible to the eye – fire light across the screen in an exceptionally uniform way. Is there anything the Aura H2O can't do?

Though hardly an ugly duckling, the Kobo Aura H2O doesn't quite match the aesthetics of either the Kindle family or the Kobo Aura HD, which it's effectively an upgrade of.

While the new Kindle Voyage is 7.6mm slim and the Kindle Paperwhite is 9.1mm, the Aura H2O is a slightly chubbier 9.7mm.

Its chunkier design shows mostly in the bezel, which not only measures 13mm along the sides and tip, but rises above the screen a little too much for my tastes, and certainly more than the Aura HD.

Easy to hold in one hand (it weighs just 227g), its soft-to-the-touch surface is perfect for gripping. Its basic look might seem retro, but the build quality is unbeatable and easily worth the money.

Button placement is a non-issue since the Aura H2O's touchscreen handles everything, there's just one on/off switch on the top that's nicely low-rise. That touchscreen, woken from 'sleep' mode by a press of the sensitive on/off switch, mostly responds to touch quickly, rapidly refreshing the e-ink screen.

Next Page Interface and Performance