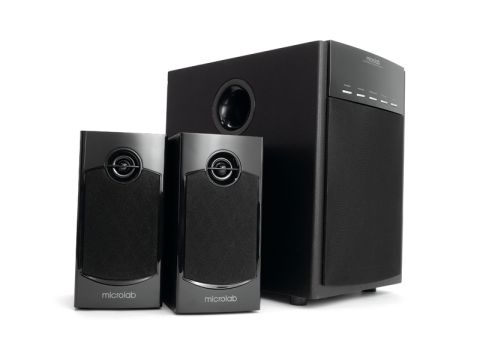 We like bass and treble controls, but there's little for the X16s to work with

Microlab's X16 speakers include the customisable low and high tones, but those adjustments are made either through flimsy buttons on the subwoofer or via an infrared remote control.

As a result of this, even before we began putting their sound quality to the test, we were sitting firmly on the fence. It's all very well having those bass and treble controls to hand, but they're completely pointless if the speakers in question have nothing to work with in the first place.

Even with the bass turned all the way up, the X16s sound muddy and flat, and with treble up we were unable to get any crisp definition on the higher end notes. Add to this the overall tacky, plasticky build quality – which may have something to do with the low-quality sound – and the X16s feel like a missed opportunity.

There is one saving grace, but it's a minor one. The X16s feature balance control, and are the only speakers we've looked at that incorporate this feature. This means that the speakers can be set up in unusual desktop situations where the satellites are further away from one another and one needs to be louder than its counterpart. It's a feature that should be easy to implement on other speakers, and we're surprised that we don't see it more often – although some sound cards and audio software can be used to achieve the same effect.

Other than the balance control, a distinct lack of any special features lets the X16s down badly. There's no option to connect an auxiliary source like an iPod or phone, for example, and you'll have to fish around the back of your PC if you want to connect a set of headphones.

The sound quality isn't terrific either, and we wouldn't want to spend any more than half the asking price on this 2.1 set. There are much better options available for the money.