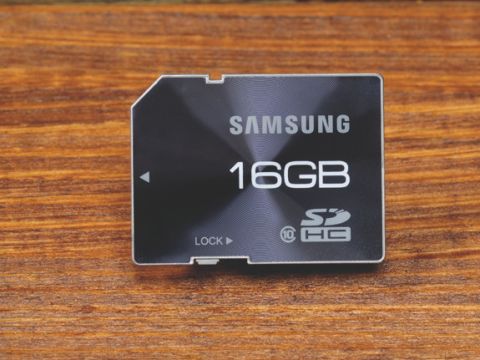 Fast and durable storage for 16GB-worth of photos

The fast transfer speeds and high capacities of SDHC cards has made them ideal for DSLR camera stills and videos, and their price continues to fall. At around £26, the Samsung 16GB SDHC Plus Class 10 card may not be the cheapest currently available, but it justifies its premium by boasting a number of protective qualities in addition to high read and write speeds.

Samsung claims that the card is waterproof, even against a 24-hour stint in sea water, and that it can withstand both the pressure of a 1.6 tonne vehicle and strong magnetic forces. Even if the card is beyond repair, claims Samsung, its data may be retrieved, and with the standard lock tab it's possible to prevent data from being recorded or deleted.

Adhering to the Class 10 SD card specification, the card offers maximum read and write speeds of 24MB/s and 21MB/s respectively, which is more than reasonable, although slightly behind the 30MB speeds offered by Sandisk's equivalent Class 10 card.

Its metallic finish is sleek, and when the card is bent it stays noticeably more rigid than the casings of standard plastic SDHC cards.

Tested in a Nikon D3100 body, the card was pitted against a rival manufacturer's Class 10 SDHC card. While the camera managed to maintain the same number of frames and speed with each, photos appeared to be written from the buffer to the Samsung 16GB SDHC Plus Class 10 card at a slightly quicker pace, since subsequent images could be taken sooner. Against the same card, images were also transferred to a computer around 20% quicker.

If you don't need its protection, you'd be advised to shop around, since you may be able to find similarly-priced cards with slightly faster speeds. But its performance shows that it's nevertheless a competitive option. It also appears as the ideal partner for the growing range of waterproof compact cameras, should anything go wrong.