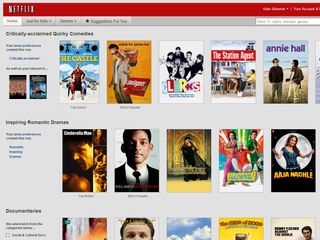 It's called Netflix, not Newflix

When we met with Netflix earlier this week, we asked TechRadar's Facebook pals what they'd like to ask the company.

Overwhelmingly, you wanted to know about the content – the films and TV shows that make up Netflix's service. Why are they so old? Will it be keeping up with US broadcast schedules? What's the deal?

We put your questions to Neil Hunt, chief product officer at Netflix, and he told us that Netflix isn't really about bringing you the newest movies at the minute they're out of the cinemas.

It's all down to price – you want to stream anything and everything including new blockbusters for £5.99 a month? How about the moon on a stick?

"The newer the content is, the more expensive it is. So we try and balance having the richest possible content that we can afford for £5.99 a month," Hunt told us.

"If it's DVD window stuff, the content owner expects to be paid £3 or £4 a time, so you can't do unlimited viewing of that kind of content on a £5.99 a month subscription, it's not going to work."

But this is the fundamental problem with a movie streaming service – if this is the distribution model that's going to combat piracy, Netflix, Lovefilm and their ilk need to be offering the best and newest films. Cutting piracy is all about improving access to these titles that are hot to trot.

After all, there's a reason why Citizen Kane never makes it into the most pirated movies lists, and it's not just because it's a bit boring.

Lovefilm, Netflix's main competition in the UK, has got around this pricing problem in a number of ways – it offers tiered subscriptions and some films, generally newer titles, are available to stream for an additional couple of quid. So how about a premium subscription service to supplement those higher-value titles for Netflix?

"I think the very newest content is fundamentally pay per view, and the subscription will be the stuff that's post-DVD window and post current season TV," said Hunt.

So we won't see a pay per view service come to Netflix then? It seems highly unlikely, given that Netflix wants to keep its sales model very simple - and doesn't want to step on partners' toes:

"Apple was pleased to partner with us because we're complimentary," explains Hunt. "We have a library of content for subscription consumption that does not overlap enormously with their pay per view offering in iTunes."

Moving on to television shows – will the UK be getting the newest and best at the same time as the US? Sadly, that's looking unlikely too:

"It's a separate content library [in the UK]. We negotiate rights buying against the terrestrial broadcasters basically, so it's a different set of rights.

"So sometimes we'll have US content in the UK before we have it in the US and sometimes the other way round – there's really no kind of fixed pattern for that."

With Netflix's rights competition in the UK including the likes of Sky and Virgin Media, we can't imagine those up-to-the-minute TV shows you're lusting after will come cheap; so Netflix users will be in for a bit of a wait for desirable US TV shows.

That's not to say that Netflix isn't worth a shot, though. £5.99 a month for a ready-made film and TV library is not bad and its recommendations engine already far outstrips what Lovefilm has to offer.

Sure, the content might not be as comprehensive as you'd like, but that library is growing all the time. And remember: when it comes to film and TV, newer isn't always better.