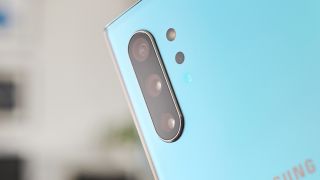 Within the first few months of 2020 we're expecting to hear official word of the Samsung Galaxy S11 series, and the latest leak suggests the top-end handset will sport a similar rear camera style to the Galaxy Note 10 Plus.

According to a leaked photo posted by Ice universe, the upcoming flagship will sport three rear cameras in a vertical design. Those are expected to be wide, ultra-wide and telephoto shooters.

The image only shows part of the rear of the handset, and Ice universe has said that it's believed there will also be a time-of-flight depth sensor and LED flash that will feature to the side of the main camera.

This is the real Galaxy S11+ camera. On the left is the ultra-wide-angle, main camera, and periscope zoom lens. I don't know the exact distribution on the right. It is expected to include flash and ToF. pic.twitter.com/98exPMSqgfDecember 16, 2019

The leak doesn't provide any clear idea of the camera quality or megapixel count we can expect on the S11 Plus.

Samsung's Galaxy Note 10 Plus and Galaxy S10 Plus both featured two 12MP sensors along with a 16MP ultra-wide one, so it may be that the company follows suit for the Galaxy S11 Plus.

Ice universe hasn't provided any sources for the leaked image, so you should take it with a pinch of salt, but they have a fairly solid track record for leaks.

Samsung will probably announce the Galaxy S11 series in either February or March next year, with MWC 2020 in late February being a likely announcement venue.