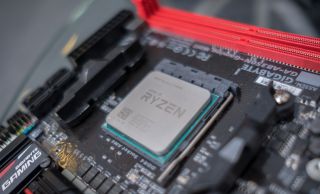 AMD has been absolutely dominating Intel in sales and we have the graphs to prove it. Ever since it dropped the 3rd-generation AMD Ryzen processors, Team Red has been giving its competition an absolute walloping when it comes to sales, and that probably won't change any time soon.

If you weren't aware, Black Friday and Cyber Monday deals are coming up in the next couple of months, and judging by the way retailers are starting to put up those Holiday decorations in September, it's going to be a big one. AMD Ryzen 3rd Generation processors have been out long enough to get some deals of their own, but we expect to see a lot of Ryzen 2nd Generation chips getting a fire sale.

So, we're going to take some time to go into where AMD is right now, and why we think Team Red is going to be taking home one hell of a pay day on the biggest shopping day in the year.

Look, we know the Intel Core i9-9900KS is going to be here in just a couple of weeks, but we really don't think it's going to be a big enough launch to distract the everyday user from the kind of value that AMD Ryzen processors offer. Personally, we're excited for the 9900KS – who doesn't want a CPU that can hit 5GHz across 8-cores and 16-threads? But, it's probably not going to be priced competitively with the Ryzen 7 3700X or the Ryzen 5 3600X.

Plus, we haven't even talked about graphics cards, and word on the street is that AMD may be pushing out more mainstream GPUs in the very near future. And, if real, those mainstream graphics cards will also probably get huge Black Friday discounts, as they're (not so) secretly the bread and butter of the PC hardware market.

Did you know you can still buy AMD Ryzen 2nd Generation processors? And, that they still hold up? Well, it's true, and we'll tell you how.

Even if you want to pick up a beastly AMD Ryzen Threadripper processor on Black Friday, you can save a ton of cash. Don't forget that AMD just announced that its going to be launching its new lineup of HEDT processors in November, along with the much-anticipated Ryzen 9 3950X. And, in case you didn't realize: Black Friday is also in November.

With a whole wave of new models, we would frankly be surprised if retailers didn't slash prices on the Threadripper 2nd Generation lineup. We don't know what the future deals are going to look like, but we expect to see some delicious Threadripper deals on Black Friday and Cyber Monday.

Moral of the story?

If you're looking to build a new PC in the near future, you should definitely wait to see what kind of Black Friday deals are going on. There is so much PC hardware that launched over the last 12 months, which makes 2019 one of the best times to build that dream PC you've been fantasizing about.

We're sure that AMD is going to want to push some deals through, as it wants as many people to use its processors as possible. The more people use these processors, the more programs will take advantage of the higher core counts, the more valuable the processors will be.

If you absolutely need that PC right now – and, really, we can't blame you – there's enough new hardware that you really can't go wrong. But, if your old PC is still hanging on by a thread, or you're just interested in picking up an upgrade to make your PC just that much faster, we'd urge you to wait until Black Friday to make the jump.

And, don't worry, you don't have to face the chaos of Black Friday and Cyber Monday alone. We here at TechRadar will be here with you every step of the way, spotting the best deals, and serving them up to you on a silver platter.