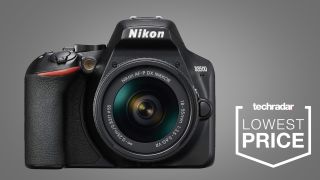 Our number one DSLR for beginners has just fallen to its lowest ever price in a Black Friday Jessops deal that gives you the Nikon D3500, plus an 18-55mm AF-P VR kit lens for just £299.

That's a particularly good deal because, unlike some other retailers, the £299 Jessops deal includes the 'VR' version of the camera's kit lens. That means it includes vibration reduction, which is Nikon's form of optical stabilisation that helps you preserve image quality when taking handheld shots.

Aside from its even lower price tag, the Nikon D3500 is a fantastic camera for beginners because it has a handy Guide Mode that takes you through the camera's main features and helps you understand the effect they have on your snaps.

Considering that lens costs £199 on its own, you're effectively getting the D3500 for around £100, which is hugely impressive value – and we think that's going to be tough to beat during Black Friday.

There are some impressive mirrorless cameras around these days, so why go for a DSLR like the Nikon D3500? Because it has an optical viewfinder, rather than an electronic equivalent, the D3500 is able to offer a lower price tag and much longer battery life than its mirrorless rivals. It can keep going for 1,550 images between charges, which is around three times as long as a mirrorless camera.

While some may prefer a more compact, travel-friendly form factor, the D3500's size means it also offers very good handling, which is another boon if you're just starting out.

This Jessops deal also throws in a final couple of sweeteners including a free 1-2-1 training course and a 12x8in canvas worth £19.99, which will be handy for turning your first great D3500 photo into wall art. If you're looking to step up from your smartphone and learn the joys of creative manual shooting, this deal is a fantastic place to start.

Not in the UK? Here are some great Nikon D3500 prices for your region.