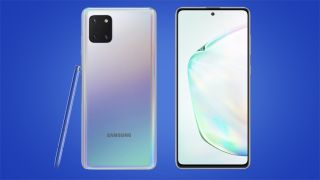 These two new Lite phones are set to bring features from the normally pricey flagship S10 and Note 10 series to a new, budget-conscious audience – we say 'set to' because Samsung is yet to disclose the exact S10 Lite and Note 10 Lite prices.

Samsung has confirmed that we'll see both new phones at CES 2020, a month and a half before Samsung is expected to reveal the Galaxy S11 (which could also be called the Galaxy S20). For now, here's what has been confirmed about the S10 Lite and Note 10 Lite.

The front-facing camera shifts to the center of the Super AMOLED Plus Infinity-O Display. As on the Note 10, it's top-center aligned instead of the normal S10's right-aligned selfie camera. Unlike on most Samsung phones, this is a 32MP front camera.

There are even bigger changes to the rear cameras of the Galaxy S10 Lite, starting with a 48MP wide-angle lens with an f/2.0 aperture and Super Steady OIS. The ultra-wide camera here is 12MP with an f/2.2 aperture (not the typical 16MP). There's also a 5MP macro f/2.4 lens for close-up photography.

The Samsung Galaxy Note 10 Lite has the same 6.7-inch Full HD+ display as the S10 Lite, with the main physical changes being the size and rear camera configuration. This phone measures 76.1 x 163.7 x 8.7mm and weighs 199g.

Of course, it also has an S Pen tucked inside of the body, which is universal on all Note phones. If the Note 10 Lite indeed has a cheaper price than the Note 10, this opens up Samsung's stylus to a much wider audience than the usual businessperson demographic (maybe one that would actually appreciate taking remote selfie with the wand-like S Pen).

The front camera is 32MP here and again center-aligned, and there are 6GB or 8GB of RAM options, with 128GB internal storage to match the S10 Lite. However, the 10nm chip seems to be the Samsung Exynos chipset instead of the Snapdragon 855.

Samsung has also unveiled two new affordable phones in its Galaxy A line. The Galaxy A51 and Galaxy A71 were announced alongside the Note 10 Lite and Galaxy Note 10 Lite.

We'll be at CES 2020, where we'll likely learn the S10 Lite and Note 10 Lite prices, and hopefully be able to get our hands on the phones early next week.