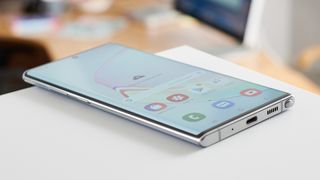 The Galaxy Note 10 Lite could look a bit like the Note 10 Plus (above) and a lot like the S11 (Image credit: TechRadar)

The Samsung Galaxy Note 10 Lite has been leaked a number of times, but only now are we actually getting a look at the possible design, and it’s a look that’s, well, very familiar.

Key features of the design – shared by 91mobiles and @OnLeaks (a reputable leaker) – include a single-lens punch-hole camera in the top center of the screen, and a large camera block in the top left corner of the rear.

That camera block is apparently likely to include three lenses, and you can also see that there’s a 3.5mm headphone port, which was lacking on the standard Galaxy Note 10.

The source adds that (again, unsurprisingly) the Samsung Galaxy Note 10 Lite will come with an S Pen stylus, as the non-Lite devices do, and that the screen will apparently be between 6.5 and 6.7 inches, while the dimensions are said to be roughly 163.9 x 76 x 8.6mm.

The specs are likely to be a downgrade on both handsets though, in order to justify the ‘Lite’ in the name. Indeed, a previous leak pointed to it having the same core specs as the Samsung Galaxy Note 9.

None of this is known for sure of course and won’t be until the Samsung Galaxy Note 10 Lite is announced, but a source suggests that announcement could happen before the end of the year, so we shouldn’t be waiting too long.