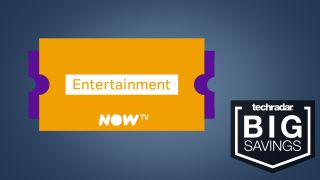 What better way is there to cure the cold February weather blues then by curling up on the sofa and binge watching a few hit TV shows? Especially with this ace Now TV deal where you get access to a wide range of movies and series for a mere £4.99...but only if you sign up by the end of Thursday!

That's right, for just under a fiver you can get a Sky Cinema and Sky Entertainment month pass. So that means access to hundreds of TV shows (every single episode of Game of Thrones anyone?) as well as tonnes of recent films and enduring classics, with one premiere added every single day of the month.

And now you can finally go full HD with the streaming service by adding its Now TV Boost for an extra £3.

Considering a month's worth of these two passes would normally amount to over £20, you're looking at a saving of over 75%!

Now TV Entertainment AND Cinema Pass| 1 month | £4.99
A scintillating 75% saving on a whole month of the best drama, comedy and cinema Sky has to offer. So there's the likes of Game of Thrones, The Righteous Gemstones, Cobra and The New Pope on the Entertainment side, and then everything from Aladdin and Avengers: Endgame to Titanic and The Godfather with the Cinema sub. The only problem you'll have is how to fit everything in in one month!

Note that once the month is up, you'll remain on these Entertainment and Cinema subscriptions, which are charged at £8.99 and £11.99 per month respectively. So don't forget to cancel before the 30 days are up if you don't want to continue.