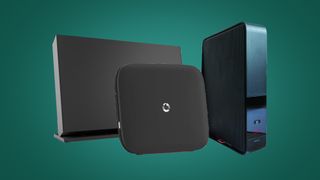 Say goodbye to pointless socks and generic chocolate boxes, because five of the top broadband providers are offering you a Christmas gift you may actually (shock) need and like - some of the best broadband deals in the UK.

OK, so even the promise of fast broadband isn't exactly what you want under the Christmas tree. But it's around this period when you really start to see a strain on your bandwidth as you slowly see a descent of your whole family into your home. Or when you start getting interrupted as you try to stream 4K television and play games on your mobile device. You won't need our broadband speed test tool to show that things are lagging.

The bundles we've picked out below include some of the best fibre broadband deals and have lightning fast speeds - this is perfect for streaming and ensuring that even if you have too many people in you're household, your Wi-Fi quality should not drop. And if you're looking for a full on broadband and TV deal we have got you sorted.

So if you want TechRadar (move over Santa) to help you sort out your awesome Christmas present, just keep reading as we outline the top five broadband deals in the UK right now for those super fast speeds.

Now, if you want to get these broadband deals sorted before Christmas day itself, you're probably just a little bit late. The connection times will likely now take you beyond the 25th. But if you start feeling the strain of your current speeds and know that 2020 should be the year you finally have an upgrade, then these five offers are where you want to be looking.

TalkTalk Faster Fibre Speed Boost Broadband | 18 months | Avg speeds 67Mb | Line rental incl. | FREE activation | £25.95 per month
TalkTalk has out done itself once again with the cheapest mega fast fibre broadband deal out there. Sign up now for a free activation (hallelujah!) and super fast download speeds for just £25.95 a month. Not to mention TalkTalk guarantees no price increases throughout the whole contract so you won't get any nasty surprises.
View Deal

BT Superfast Fibre | 24 months | Avg. speed 50Mb | Weekend calls | £9.99 delivery | £28.99pm | FREE £80 Mastercard
BT, one of the top broadband providers in the UK, can often be considered a bit too expensive. Well it's definitely not with this fibre deal - average download speeds of 50Mb guarantee excellent streaming and its all for just £28.99 a month. Not to mention you're getting a whopping £80 Mastercard - which will come pretty handy at this time of year.
View Deal

3. Did someone say cashback?

Plusnet Unlimited Fibre | 18 months | 66Mb average speed | Free calls to Plusnet customers | £27.50 per month | FREE activation | £70 cashback
Does average download speeds of 50Mb sound just a little bit too slow to you?  Upgrade this to 66Mb, all whilst paying a little bit less than the BT deal and still getting that awesome freebie - £70 cashback to be exact. All of that and free activation? Merry Christmas to you too Plusnet.
View Deal

4. TV and broadband sorted all in one

NOW TV Super Fibre + Sky Cinema or Entertainment Pass| 12 months | 66Mb average speed | Free calls to Plusnet customers | £35.99 per month | FREE activation |
With everything happening so quickly these days, having one big bundle that sorts out your broadband and TV deals is exactly what you need. So for just £35.99 you would be getting average download speeds of 66Mb and a Sky Cinema or Entertainment pass. Both excellent passes, Sky Cinema gets a new premiere every day and the Entertainment pass an array of excellent channels including Sky Atlantic, Fox, Comedy Central, MTV and much more!
View Deal

Virgin Media Ultimate Oomph | 12 months | 516Mb avg speed | Weekend calls | £35 set-up | £89 per month
For anyone who wants everything sorted in one big bundle.. this is it! Busy house holds and streaming lovers Virgin is here to save the day, with 516Mb average download speeds, over 260 channels (including Sky Sports, BT sport and Sky Cinema) and inclusive weekend calls to UK landlines and Virgin Mobiles. Not to mention the two Virgin TV V6 boxes it has thrown in which allows you to record and pause live TV.
View Deal

Find the best broadband deals in your area

We will keep your postcode private, but it helps us find deals that are available to you