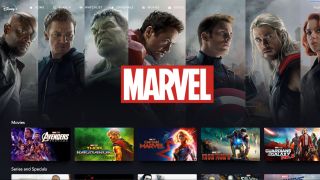 Disney Plus could be coming to the Sky Q set top box, if reports on a new licensing deal between Sky and Disney come to fruition.

As reported exclusively by The Telegraph, UK broadcaster Sky is in talks to bring Disney Plus programming to Sky Q subscribers, unleashing hundreds of hours of Marvel, Star Wars, Pixar and classic Disney content on UK viewers.

You may be thinking, isn't Disney Plus coming to the UK anyway? You'd be right: the Disney Plus UK app is set to launch on March 24, a full week ahead of its original release schedule, with a £5.99 per month or £59.99 per year subscription cost.

The difference with this Sky Q deal is that these Disney Plus TV shows and movies would be integrated within the Sky Q platform, providing access within a bundled subscription alongside the likes of Sky Atlantic, Comedy Central, and MTV.

Sky is already a big destination for Disney content in the UK, and its existing licensing agreements with Disney may be part of the reason the Disney Plus UK launch date was so far behind the US.

It's worth noting that the Sky Q box already includes the National Geographic channel – which is the fifth pillar of the Disney Plus platform (after Marvel, Star Wars, Pixar and, you know, Disney), meaning some of the groundwork for integrating the service may already be in place.

You'll still be able to access the Disney Plus app by itself on any number of smart TVs, browsers, or smartphones after it launches in the UK in March, but for those after an integrated experience – where The Mandalorian or The Falcon and The Winter Soldier sit alongside Chernobyl and Riviera – in a single entertainment package, as you get with Netflix in the Sky Q Ultimate on Demand subscription, this news is certainly exciting.

Will the deal pull through? it seems likely – but be sure to check back with TechRadar to see how this story develops.