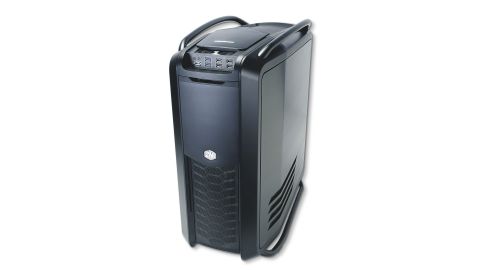 Ever heard of megalophobia? It's the fear of large objects. Cooler Master's Cosmos 2 Ultra (also known as the Cooler Master Cosmos II Ultra) tower is most decidedly not designed with megalophobes in mind.

It's less like a high-performance PC chassis and more like a case-shaped chunk fell off the Death Star that just happens to accommodate PC components.

All manner of components too - its incredible size will be handy for anyone looking to house three-way or four-way GPU arrays, and overclockers will appreciate the generous CPU cooler headroom and space for three overhead fans (two are supplied).

Special attention has been given to power supply and HDD/SSD installation, too.

Both are compartmentalised to maximise cooling efficiency in a manner similar to the Thermaltake Level 10 GT, although the Cooler Master Cosmos 2 Ultra's build quality shines through by comparison.

Three 120mm fans keep up to a massive 13 drives cool, leaving plenty of space to build what'll inevitably be a dream machine up top - inevitably, because the case alone costs £330, and laughs in the face of budget gear.

The question of value for money is almost moot for the Cooler Master Cosmos 2 Ultra.

Yes, it costs only slightly less than Greece's GDP, and yes, a £100 case would do nearly as good a job at housing your gear and keeping it cool, especially with a bit of cheap modding on your part.

But we're prepared to let the ridiculous price slide here, because unlike the Thermaltake Level 10 GT, which we strung up on a cross for being so exorbitant, it's hard to look around the Cooler Master Cosmos 2 Ultra's cavernous interior, strong aluminium parts and generous fan array and find any corner-cutting or cost-cutting.

Quite simply, the Cooler Master Cosmos 2 Ultra tower has charisma.

Its monolithic shell will fascinate even non-gamers, and it provides a fitting home for the best graphics cards, CPUs and storage on the market.

Its daunting array of case fan connectors means it isn't the quickest or simplest to get up and running, but we defy you not to lower your head in a respectful bow when you power it on for the first time, all fans and fury.

If your CPU cooler is a dual-fan affair like the Corsair H100, you might find it tricky to mount that cooler to the roof and occupy the final 120mm slot - a little fiddling is required.

The same goes for cable management, again due to that wilderness of cables and connectors inside the Cooler Master Cosmos 2 Ultra's hinged aluminium panels.

But even with these niggles, it's a giant leap forward from the original Cosmos that, though brilliant, was lacking in space behind the motherboard plate to tidy cables away, and suffered insubstantial panel locking mechanisms.

No such problems here.

On the top of the Cooler Master Cosmos 2 Ultra is an 'advanced control panel.'

That comprises of a set of buttons around the main power switch that enable you to alter the speeds of every fan in the case, or just a certain section such as the front or top.

It's also nice to see not one but two USB 3.0 ports on the front I/O panel - they always come in handy. Equally welcome are the front, top and bottom dust filters to keep everything clean inside.

What's not to like about this new flagship case from Cooler Master?

It'll house any component array you can think of because it's long enough for honking great dual-GPU cards and wide enough for the largest air CPU fans.

What's more, it'll do it in style, thanks to some great features such as sliding front panels, hinged panels and a dark aluminium finish.

It wouldn't get the go ahead from George Osborne as a sound investment, but that's not the point of this Cooler Master Cosmos 2 Ultra - it's a lavish purchase designed to fit other lavish purchases in, and in doing that it succeeds entirely.

This is an impressive chassis that really works its socks off to justify the, admittedly huge, investment. If you even need to ask the price, you can't afford this case. If you can afford it, you won't regret a penny.