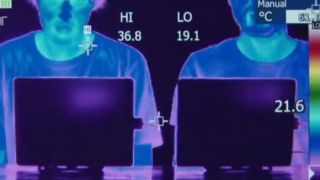 We've heard numerous reports regarding temperature issues with the new iPad – with some saying that Apple's third generation tablet computer can heat up to a scorching 46 degrees Celsius (116 Farenheit).

Update: Although Apple reckons the temperature issue isn't really an issue at all, TechRadar has investigated the heat complaints with a 30 minute in-depth test, where we played Infinity Blade while running a number of applications in the back ground.

Update: After half an hour of solid gaming, with lots of multi-tasking action going on, our new iPad clocked a toasty 45.1 degrees Celsius (113.2 Farenheit).

In our initial test (video below) we started up both the new iPad and the iPad 2 from cold, with the charger plugged in, and played Infinity Blade for 30 minutes.

After 30 minutes the iPad 2 recorded a high of 32.3 (90 Farenheit) and the new iPad running at 38.9 (102 Farenheit) - that's almost four degrees Celsius hotter than its own prescribed thermal specifications.

Thanks to Livingston for supplying TechRadar with the thermal imaging video camera.