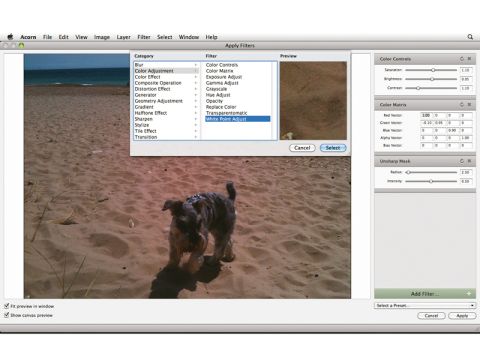 You can chain filters, see how they affect your image, and save the chain as a preset

Acorn bills itself as the "image editor for humans" and it's easy to see why.

Rather than sprinkling myriad palettes around the screen or deluging you with a baffling amount of options, you get a single tools palette; this houses the app's selection of tools, context-sensitive settings for the current tool, and your image's layers.

On small screens, this 330-pixel-wide slab of interface might grate, but it's easily toggled with the Tab key and it works well on larger monitors.

The user-friendly nature of Acorn continues throughout the bulk of the application: tool settings are clearly labelled, and powerful filters can be applied in a separate window that enables you to chain multiple effects and save them as a preset.

Acorn 3 introduces Layer Styles, a feature that provides a stripped-down (and slightly less configurable) set of effects that are non-destructive, including shadows, blurs and colour settings. In both cases, the ability to preview how combinations of effects amend your image or layer is useful.

Acorn 3 also brings some big changes to vector objects, making it more suitable for interface design. For example, if anyone's designing for screen, then they can use the 'snap to pixels' option for shapes, to keep everything sharp. The ability to dynamically update corner radius and stroke settings for vector objects will also be a boon for web and interface designers.

Elsewhere, anyone working with shapes and text will be pleased to find these things can now be rotated, have gradients applied to them and be converted to Bezier objects. And Bezier curves are now also more flexible, since you can add and subtract points.

Selections are also much improved in Acorn 3, moving the app from being primarily about special effects and basic image manipulation to one suitable for complex bitmap editing.

The new Instant Alpha tool aims to work like a magic eraser — you click-drag to remove blocks of colour; this is fine for large, flat areas, but we found it lacking for making detailed selections. However, the new QuickMask deftly deals with complex masking, enabling you to 'paint' a mask and turn it into a selection.

However, the update's not quite without problems. While we appreciate the 'Color Correction' section of Acorn's documentation, some quick-fire tools for photography colour-correction would be welcome, and we also found Acorn's performance a problem on a Core 2 Duo iMac, especially with larger images and when compared to Photoshop. Also, PSD import is billed as 'improved', but remains variable.

But, criticising Acorn 3 too much would be a tad churlish, because this release represents a turning point for the application. We've long admired Acorn but have always wondered who it's actually for, largely due to its scattergun approach regarding features, offering a few insanely powerful tools but irksome omissions.

With the improvements in this release, it matches Pixelmator for basic image edits, betters all of its rivals regarding special effects, and is even starting to muscle in on Adobe Fireworks's turf regarding interface design.

It's not quite in MacFormat Choice Award territory yet, but Acorn now does more than enough to justify purchase for basic interface design, quick image edits and effects work – at least if you've a reasonably recent Mac to run it on. And for existing Acorn fans, the upgrade price is a total no-brainer.