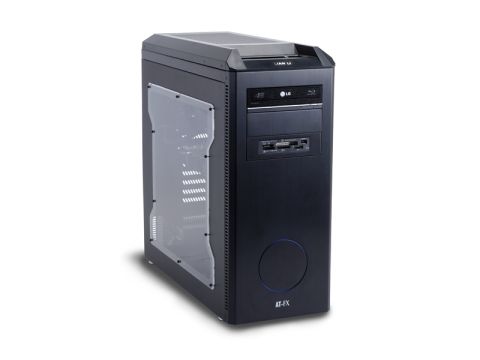 Intel's new Z68 chipset has a lot to offer. In short, P67 and H67 functionality are combined onto one board, with SSD caching. It might not have a tremulous impact on gaming performance, but that increased functionality is surely welcome in any desktop PC.

There's also serious power saving potential with Lucidlogix's Virtu software, which can turn your GPU practically off when it's not needed.

This is where AdvanceTec has made its first mistake: the ATFX-Tron doesn't come with Lucid Virtu installed. Sure, you can install it yourself by digging out the motherboard's driver disk, but that seems at odds with buying a system builder's machine – the hard work should be done for you. It seems a bit like ignoring one of the Z68 chipset's best features.

The counter-blow to this is that AdvanceTec has set up Smart Response over your SSD and HDD for you. To be fair to AdvanceTec, it's set its stall on this issue based on pure gaming performance – there's a clear advantage in Smart Response, but it doesn't want Virtu messing with frame rates.

Even so, when we road tested the Asus P8Z68-V Pro, we certainly didn't find that the software had a negative impact on gaming performance.

The apparent emphasis on gaming highlights other issues with AdvanceTec's choice of components. Does a thoroughbred gaming rig really need a Blu-ray RW drive? Probably not. Is 16GB of RAM going to improve gaming significantly, compared to 8GB? Negative. And yet there they are, sitting in this gaming rig.

Surely the star component of a gaming machine is the GPU. We've waxed lyrical about how good AMD's HD 6950 is ever since its release, and we're pleased to see it make an appearance in the ATFX-Tron.

Again, bearing in mind that this is a gaming rig, it's disappointing to see the 1GB incarnation of the card instead of the beefy 2GB. There's hardly anything between them monetarily, but in gaming performance terms it's a big deal – that extra 1GB of frame buffer makes all the difference, especially at higher resolutions.

AdvanceTec has done a good job in building the rig. Cables are fastidiously tidied and the Core i5 2500K has been handily bumped up to 4.6GHz. Other system builders have this price point sewn up for gamers, but it's a misallocation of funds, rather than a cheeky mark-up, that's hurting the ATFX-Tron.

If you built this rig yourself it would be just £43 cheaper – as teeny as mark-ups get. It would be excellent value, if you wanted all the components you're getting.

Ultimately, the problem is focus. This is actually a decent image manipulation/3D design rig – the RAM makes sense for chewing through hefty applications, and the SD card and other storage device inputs on the front panel would be useful to anyone working with large image files.

It's hard to recommend to hardcore gamers, though. But consider it if you're constantly Alt-tabbing between Illustrator and Portal 2.