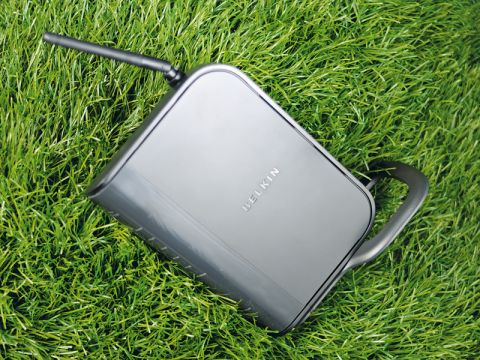 This router is sadly hobbled by its very poor download performance

For just £35 you get a fully functioning wireless gateway with support for high-bandwidth ADSL2+ connections, four-port Ethernet routing and G-spec wireless connectivity.

Granted, even Belkin itself makes no great claims regarding the G Wireless Modem Router's high performance prowess, instead styling it "perfect for setting up a simple wireless network".

So long as you don't need N-class wireless throughput, why pay more? At least, that's what we thought until we fired this deeply disappointing unit up and began to generate performance numbers. The results are very ugly.

Funnily enough, the worst of the problem doesn't involve local network throughput. Granted, it pulls up the rear in our 1GB file transfer test. But it's only marginally slower than its closest competitor, Netgear's DG834G.

Likewise, it's not much worse than the Netgear when it comes to streaming high bandwidth video.

The harsh truth is that neither of the G-spec routers does a great job of that. No, the really horrifying aspect of the Belkin's performance involves broadband throughput.

Despite syncing at over 16MB per second and therefore within around 1MB of the quickest routers here, actual download speeds were nothing short of glacial.

Wi-Fi or Ethernet, the connection type matters not, you get essentially the same pathetic downstream throughput around the 2.2MB per second mark. The fact that upstream performance at over 0.8MB per second is much more acceptable is scant consolation.

In fact, so stunned were we by the Belkin's catastrophically awful downstream broadband performance, we swung past our local PC World and picked up a second example. Long story short, it was every bit as bad.

What's more, a quick Google scan reveals a common tale of woe from those unfortunate to have to paid good money for such a substandard device.

In that context, the fact that Belkin has bequeathed it with a tolerably browser-based user interface hardly matters. Nor, frankly, do other niggles that we have, such as the lack of support for port forwarding or default access details such as the router's IP, username and password. It's all academic.