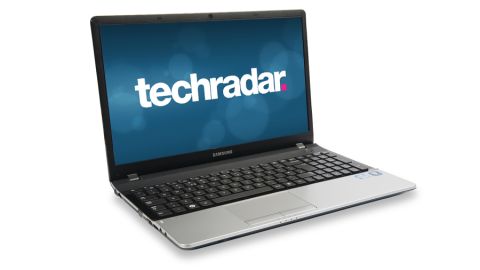 A good budget laptop if all you need is the basics

The Samsung Series 3 NP300E5A sets the standard for budget laptops. It's a solid looker that packs more power than its closest rivals, but does suffer a low quality keyboard.

The 15.6-inch Samsung NP300E5A has a silver plastic lid decorated with a black strip, which looks eye-catching, if a little corporate. It gives off a pleasing shine, emulating high-end brushed metal finishes, but on closer inspection, the textured lid is plasticky with substantial flex.

The keyboard also leaves a lot to be desired and feels extremely basic. The keys are small, there's little cushioning and it's extremely noisy. There's a numeric keypad to the right, and basic function buttons across the top for sounds and brightness, but it's clear that costs have been cut.

The trackpad is smooth and accurate, but the buttons feel loose and rickety.

Under the hood, however, things pick up. Samsung has included an Intel Core i3 2330 processor that stacked up well in our tests. It will comfortably multitask most applications, and tears strips off the Celerons and Pentiums found on other sub-£350 laptops.

We used the Samsung Series 3 extensively and it rarely struggled to keep up as we browsed the web, opened applications and switched between tasks.

This Intel Core i3 chip is also used for graphics power and the lack of a dedicated card for handling whizzy graphics produced low scores in our gaming tests. There's enough grunt to play high-definition movies without stuttering, but forget games - even basic titles will be beyond the Samsung's grasp.

Samsung also features 4GB of RAM, a 500GB hard drive - standard for low cost laptops - and has enough storage for large collections of music and movies.

While the Series 3 had the power to play movies, it didn't excel in terms of the screen. The 1,366 x 768 panel has a matte finish, which makes it much better for working in direct sunlight. The pay off is that the screen looked a little dull and didn't do a good job of bringing movies to life, but budget laptops are never designed to be entertainment-focused.

At 2.3kg, the Samsung is more portable that most budget laptops, but you will notice the bulk. We achieved 196 minutes in our tests; a very solid score. You could work for four hours away from the mains, and certainly watch a HD movie before running out of juice.

The Samsung Series 3 laptop is a capable machine that is ideal for people who want to do the basics of home computing, without spending silly money.

If you're looking for a stylish, portable and fast machine, you'll have to spend more, but if the basics are all you need, this Series 3 is worth considering.