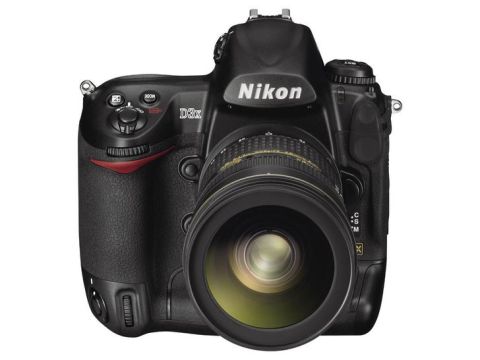 Do you need more than twenty million pixels? Canon thinks so, and you can pick up the 21 million pixel EOS 5D Mark II for a shade over £2200 on the high street.

Nikon is the latest DSLR manufacturer to jump on the ultra high-resolution bandwagon, and it's new 24-megapixel D3x is on sale at a photographic store near you for £5500.

Wait, that can't be right, surely?

Well, yes it is. You see, the D3x is a professional DSLR, and technically, the Canon EOS 5D Mark II and Sony Alpha 900 aren't.

This means that the D3x has full weatherproofing, including a virtually bulletproof magnesium alloy shell (although we wouldn't risk testing that) and all of the little extras that professionals rely upon, like 100% viewfinder coverage, and the best AF, white balance and metering systems around.

In theory, then, you should be able to drop the D3x down the side of a mountain, dust it off, and still take a better picture with it than you could with a less expensive camera.

In practice, the theory is more or less born out. The D3x shares the same body as the D3, which was released in 2007, and has enamoured itself to thousands of professional photographers worldwide.

It shares the same world-class AF, white balance and metering systems as well, and is fitted with the same LCD screen, the same Live View system... and, well, you get the idea. What the D3x has that the D3 lacks is pixels.

An extra 12 million of them in fact, on a sensor that is closely related to that used in the Sony Alpha 900.

Like the Sony Alpha 900, the incredibly high resolution of the D3x delivers files of an extraordinary quality, both in and out of the studio, between ISO 100-400.

Get much above ISO 400 and the noise starts to show, but unlike the go-everywhere, do-everything D3, this is camera designed for one purpose - high resolution at low ISO settings, and it does its job very well.

That said, a handy DX-format crop mode allows the camera to shoot at 7 frames per second at a reduced resolution of 10 million pixels, which makes it potentially a very useful tool for sports and action photography as well. The battery life is worth noting too, at an incredible 4,400+ shots per charge.

A lot of people have expressed surprise - shock, nay, indignation - at the cost of the D3x, but anyone that complains at the price tag of this camera is missing the point.

Professional gear comes at a premium, and it always has. The Canon EOS 1Ds Mark III from Canon, for example, offers the same resolution of the EOS 5D, but in a tougher professional quality body, with top-notch AF and metering. Its list price is very similar to that of the D3x.

The problem with the D3x is that all of its systems are inherited from the D3. A superb camera, no doubt, but one that is 18 months old. Its Live View system for example is capable, but not as refined as that used in the enthusiast-level D90.

Likewise, the full-frame sensor of the D3x lacks an in-built dust-reduction system. The EOS 1Ds Mark III has one, and so does the 5D Mark II, and so too does the Sony Alpha 900. I'm sure I don't need to remind you that all three cameras cost less than the D3x.

What Nikon needs to do now is release a lower-cost, semi-pro DSLR with a similar or equal resolution to the D3x, minus some of the refinements that most photographers don't need (like 100% viewfinder coverage) but incorporating some others that they do (like in-built sensor-cleaning).

Until then, anyone that wants more than 12 million pixels from a Nikon DSLR will just have to save up.