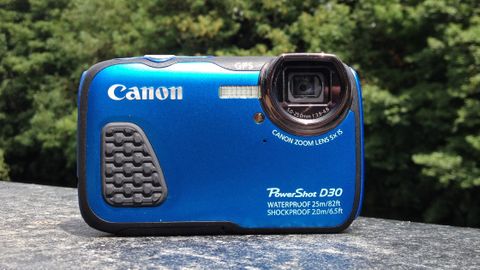 The D30 is Canon's toughest compact yet

A camera designed to be at home in action-packed environments needs to keep pace, and fortunately the D30 is ready to shoot in approximately one second and doesn't waste time autofocusing. In good light the system is almost instantaneous, though in darker conditions you'll need to wait up to 1.5 seconds for the camera to find its mark. Although the D30 is capable of focusing down to 1cm from a subject, it doesn't focus at or near this distance as reliably as the Olympus TG3 or Ricoh WG-4 will, whether in Auto or Program Auto modes.

Exposure metering is usually reliable, though high contrast scenes can cause the camera to expose primarily on highlight areas, causing midtones and shadows to look unrealistically dark. However, when the system does capture an accurate exposure, the sensor's underwhelming dynamic range becomes apparent as highlights are susceptible to burning out.

Chromatic aberration (purple fringing) is also visible in high contrast scenes, though it's rarely severe and is usually only apparent when pixel peeping. The lens also produces very low distortion and has good corner sharpness, while its Image Stabilisation system does an excellent job of ironing out camera shake.

The D30's 12.1MP sensor now trails the competition in outright resolution, though at low sensitivity settings it's still capable of resolving decent detail levels. At ISO400 detail is battling with some grain noise, but Canon hasn't tried to conceal this with excessive smoothing, hence distant subjects don't display the painterly look that's all too common with compact cameras.

By ISO800 grain and colour speckling are visible, but aren't distracting unless you scrutinise at full image size. ISO1600 is certainly the limit for acceptable image quality though, with noise being high enough for most images best viewed at 50% or smaller.

Colour reproduction is as restrained as the D30's noise reduction processing, meaning that although images never look oversaturated, they can lack some instant visual appeal.

The My Colors menu hides plenty of colour enhancement options to boost vibrancy though, or the Color Swap mode will completely replace a colour in a saved image. Other extra features like the Move Digest mode also work well, capturing a couple of seconds of video prior to a still snap and compiling the results into a video montage. Canon's wink-activated self-timer is another nice touch.

Annoyingly there's no automatic panorama mode though, as the D30 has to make do with just a stitch-assist mode designed to prepare multiple overlapping frames for stitching in Canon's PhotoStitch software. The results are generally better than the low-resolution panoramas created by most compact cameras, providing you've got the time to snap multiple adjacent images and process them later.

The Canon PowerShot D30 represents a significant toughness and ergonomic upgrade over its predecessor, the PowerShot D20. Now capable of withstanding class-leading 25m underwater depths, it's certainly a fine choice if you're a keen diver. It's also one of the easiest cameras to use and hang on to once you're submerged or wearing gloves.

Unfortunately there's little else to make the D30 stand out. Its sensor and processor specs are unchanged from the D20 and are showing their age, producing only average quality images in the tough camera class.

The D30 leads the way in terms of underwater ability. It's also a pleasure to use thanks to a carefully considered design and a bright LCD display.

Image quality isn't bad compared to rival cameras, but a tendency to underexpose can make shots look initially uninspiring. Macro focusing isn't as reliable as it could be, and the camera lacks Wi-Fi connectivity and an automatic panorama mode.

The D30 excels underwater and its new external design makes it one of the most ergonomic tough cameras on the market. However, its direct rivals will all go to at least 14m depths, which should easily be deep enough for a typical spot of snorkelling or recreational scuba diving.

The D30 does also make a case for itself with its bright LCD monitor and GPS location tagging, but unless you'll use the camera's extra underwater ability, more feature-packed rivals like the Panasonic Lumix FT5 and Ricoh WG-4 GPS can be had for similar money and are better all-rounders.