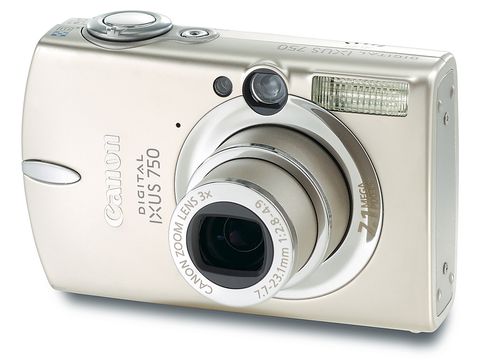 Amazing quality again from an IXUS, and now it comes with a jumbo screen

Canon's IXUS camera range has been a popular line for so long time now that it can rightly be called a classic.

There is something very Mac about the design of the IXUS, perhaps it's the brushed steel casing and sleek curves, but more likely the performance and reliability. The amount of metal used in the body gives it a weighty reassuring feel, a feeling that continues with solid button clicks and smooth menu layout.

The CCD in the IXUS 750 is 7.1 megapixels, which combined with the Canon's vaunted DIGIC II processor gives you a compact digital with real power. The capture quality is good enough to take a well-lit shot, and blow it up to A3 size without much loss of quality, although we didn't try.

The DIGIC II processor is worth dwelling on. It's the same processor that has proved itself so brilliantly in the high-end pro- SLRs. DIGIC II is Canon's main weapon, containing fast algorithms for instant colour balance, compression, fast startup times, and gathering huge amounts of data between shots without hangs or freezes.

On the top of the body is a fan-shaped microphone and speaker, for assigning sound to either video or stills. Then, covered by a small flap, is the AV out and USB connection panel.

Underneath is the battery compartment which shares a small spring loaded door with the SD. Sliding in the SD gives a solid sounding click, and it moves with steely precision.

The main feature is the massive 2.5-inch LCD screen on the back, which we used to frame most of our shots. Rarely did we use the actual viewfinder.

The picture quality the LCD offers is fantastic. As the lens focuses small green frames appear on the LCD to show you which parts of the view are being used as focus points.

We also noticed fast contrast correction when moving the view from sunlight to indoors and back again. It's fast enough that the view is already perfect by the time you are ready to snap. And its one of those screens on which you can still view the display even from a very tight angle. So you can frame shots using the LCD even when the camera is at arm's length above your head.

We only had two complaints, one being the familiar Canon moan about the stingy MMC card that comes in the box. At only 32MB that's one small video and a half dozen shots away from being full. Also, the macro function doesn't really zoom down very close to surfaces.

Try a simple 3x SLR macro filter on any standard lens to see what macro should be like. That aside, this is still the best digital compact we have handled in recent times. James Ellerbeck