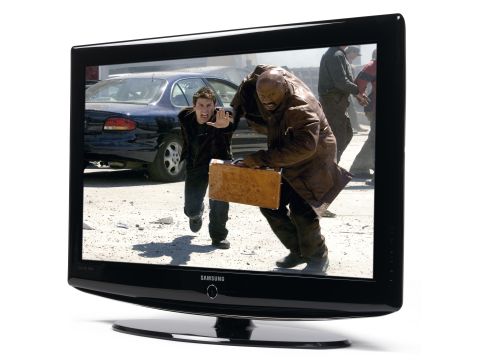 Aesthetically, the TV is a combination of a slender gloss black bezel with rounded edges and an pretty arc along the bottom

A fine example of the best in LCD technology, and at a great price too

Finding any sort of 37in flat TV for £900 is a cause for celebration. So finding one as feature-heavy and pretty as the Samsung LE37R87BDX almost warrants a national holiday.

Aesthetically, the TV is a combination of a slender gloss black bezel with rounded edges and an pretty arc along the bottom.

Three is the magic number

The first impressions these glamorous looks create are reinforced by the discovery among the LE-37R87BDX's connections of a bountiful three HDMI inputs. What's more, these three HDMIs are CEC enabled, permitting your TV remote to control any other CEC-enabled equipment attached to them.

Other jacks include a dedicated PC port, component video inputs, a digital audio output and a CAM slot revealing a built-in digital tuner.

With a native resolution of 1366 x 768 and a sky-high claimed contrast ratio of 8000:1, everything looks hunky dory on the key specification front too - especially as pictures are also supported by a Movie Plus mode that offers enhanced 3:2 progressive pull down to improve LCD's motion issues, plus Samsung's Digital Natural Image engine system for improving colours, black levels and detail levels.

Mission: Impossible 3 on HD DVD provides a stiff test of any LCD TV's abilities, but this TV rises to the challenge ably, despite its low price tag.

The image's sharpness first catches the eye, helping the screen portray every bead of sweat on Ethan Hunt's face during the opening scene.

Next to impress are the TV's black levels. Night skies look convincingly black and natural, lending scenes like the 'rabbit's foot' theft some impressive dynamism and scale.

Providing a dazzling counterpoint to the surprisingly rich black levels, meanwhile, are some exuberantly bright, fully saturated colours. Thanks to these, the scenes at the Vatican party look intense and involving. But unlike some previous Samsung TVs, the colour dynamism isn't achieved at the expense of natural tones.

The only significant complaint we have with the TV is that it doesn't handle motion especially well. Without using the Movie Plus mode, moving objects look slightly indistinct and smeary. But with the feature active there's some extra lag over skin tones and a vague flickering effect around some moving edges.

But let's put all of this into perspective: you're not going to get perfection on a 37in LCD TV for £900. The very best you can hope for is something better than same-priced rivals - and in that respect Samsung's 37R87BDX succeeds quite spectacularly.