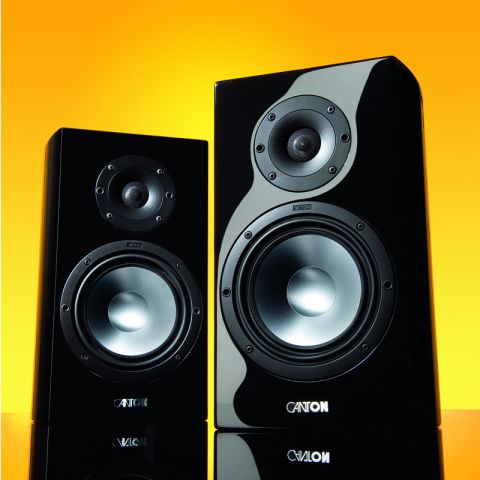 This is very fine little speaker, which both sounds and measures rather well

The Vento 820 really emphasises the benefits of the standmount approach, with great freedom from boxiness

Despite a number of serious attempts, the majority of German loudspeaker brands have hitherto had very little impact upon the UK marketplace.

Canton, however, certainly has the muscle to change that, via its newly appointed UK distributor Computers Unlimited. The Canton catalogue might be exclusively speaker-oriented, but it's no less comprehensive. The hi-fi section alone comprises no fewer than eight distinct ranges and more than 60 models and the Ventos are close to the top.

They consist of five stereo pairs, plus a couple of home cinema extras and sit just below the even more refined Reference models, with which they have much in common. The company headquarters is located in the small town of Weilrod in central Germany, but much of the production is carried out in its factory in the Czech Republic, helping to maintain competitive prices.

This £1,200 per pair Vento 820 standmount is based on advanced cabinet work and drive units. The former is nominally available in four finishes – high-gloss black or white, satin silver and high-gloss veneer – though Computers Unlimited is only listing the highgloss black and white options.

More important than the surface finish is the way the enclosure is constructed. By curving the sides and making the rear panel much narrower than the front, the enclosure is made inherently much more rigid (the 'eggshell' effect), while reflections are properly dispersed and standing waves in the horizontal plane are well distributed.

The technique used to achieve the curved sides involves shaping six thin layers of fibreboard and gluing them together one-by-one to form a very strong laminated form.

One factor that tends to distinguish the larger speaker brands like Canton is that they have the will, resources and motivation to design and make their own drive units. This doesn't necessarily confer an advantage over those that buy in drivers from OEM suppliers, but it does for one thing guarantee exclusivity.

Canton has long favoured the metal diaphragms used by both drive units in this two-way design. The bass/mid driver used here is a 180mm unit with a 115mm diameter dish-shaped aluminium diaphragm. This shape, with its concave cover over the voice coil region, presents less obstruction to the tweeter output than the more conventional convex dust cover. It also features a radical new double sinusoidal 'wave' surround

The tweeter uses a 25mm aluminium-manganese alloy dome under a moulded phase compensator and a protective grille. A key feature here is that the dome and the voice-coil former are fabricated as a single continuous piece, avoiding any glue-joint weakness.

A rear port provides reflex loading to reinforce the bass and a single terminal pair is solidly mounted through a metal plate. This leads to a high-quality crossover using tight tolerance components, feeding the tweeter at 18dB/octave.

Although the tweeter has its own mesh protection, conventional fabric covered, wood-framed grilles are also supplied. These fit neatly into the driver frames, but are probably better avoided on sound quality grounds.

The Vento 820s were primarily fed from a system comprising a Naim NAC552 preamp with NAP500 and NAP135 power amplifiers, driven from Naim CDS3/555PS and Rega Valve Isis CD players, as well as a Magnum Dynalab MD106T FM tuner. Vinyl record players included a Linn/Rega hybrid and a Roksan TMS3/Artemiz, all using a Soundsmith Strain Gauge cartridge. Cables were from Naim, Phonosophie, The Chord Company, TM Systems and Vertex AQ, while the speakers were Blu-tack coupled to Kudos S100 stands.

It's a tough task to bring a small standmount into the listening room in place of a very large floorstander, so it's very creditable that the compact Canton by no means disgraced itself. In fact, it stood up to such a stern test very well indeed.

Some loss of bass weight and power was of course inevitable, but one was also immediately made aware of the bonuses that a compact and well-engineered standmount can bring to the party.

Even though the port here wasn't ideally tuned to match the characteristics of our listening room, the bass end of the little Canton sounded clean and agile, while the sound as a whole showed excellent spaciousness and freedom from boxiness. The stereo image was simply spread around and between the speakers, combining good focus and coherence with no tendency to cluster close to the speaker boxes.

Although one is naturally somewhat apprehensive at ascribing stereotypes to nations, German speakers do tend to have a slightly brighter balance than UK designs.

Indeed, it has been suggested that this might be related to the observation that speech in the German language has a rather harder edged character with more consonants than spoken English and the speakers are voiced to maximise intelligibility.

Whatever the reasons, the Vento 820 standmount is indeed a little brighter than average and certainly doesn't take the more laid back approach that some UK brands adopt. However, it has an essentially sweet nature that hangs on in exceptionally well and the net result is that it somehow manages to sound bright and open without becoming uncomfortably aggressive.

That said, wind the volume up a little too high and voices can take on a slightly edgy quality, though that will depend somewhat on the ancillaries which are used to drive it from further up the chain.

The 820's slight tendency to over-expose the presence and top end might, perhaps, sail a little too close to the wind for some tastes, but to our ears that can be a positive advantage, as it helps to make detail clear and voices very intelligible, even when the system is operating at very quiet, late at night levels.

Indeed, apart from its limited bass weight, there are few grounds for criticising the Vento 820. Colorations are well controlled, so that speech sounds clear, open and free from any boxy effects. The dynamic range is impressively wide and dynamics themselves show a decent degree of expression.

However, its best feature is arguably the outstanding stereo imaging, which seems to make the most of the extra precision that's usually associated with metal-diaphragm drivers. Image focus is particularly good and this helped make it very easy to distinguish the different characters of pre, power and integrated amplifiers.

At one point, during the auditioning, it was necessary to try some different speaker cables. This would normally involve re-introducing a pair of large and costly reference-standard floorstanders to the listening room, but the little Cantons proved comfortably able to discriminate between the cables, rendering the furniture rearrangement quite unnecessary.

This is very fine little speaker, which both sounds and measures rather well. Even though it wasn't ideally matched to our listening room, its sound quality still did a great deal to justify the increasingly popular standmount approach.