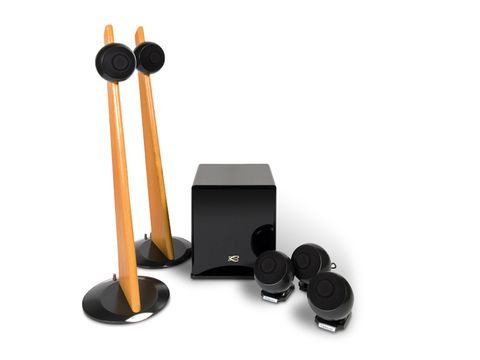 In France, speaker brand Cabasse is celebrated for its avant-garde creations, but are we Brits ready for floating tweeters and balls that balance on rare-earth magnets? Let's see...

Meanwhile, the powerful magnets mean super-fast and efficient drive units. And, I think you'll agree, the styling is magnifique!

Cabasse has also managed to keep the price of its new iO2 line relatively low – well, low for a company that makes the flagship £108,000-per-pair La Sphere speaker – and with its uniquely flexible stand-, table-, wall- and ceiling-mount options, these curvaceous cabinets could suit almost any size room.

Spatially Coherent System (SCS) is the philosophy behind Cabasse's round speakers, and it all started with the legendary La Sphere. The tech has trickled down to the three-way Baltic system, and smaller two-way Eole 2. It's that latter solution that has been further refined and upgraded here in the iO2 package.

The result is a stylish array of five compact two-way satellites, able to deliver a remarkably spacious and punchy sound, with the more sizeable subwoofer providing a beefy low-end. It's a tonal balance that's attacking, rather than warm and mellow, which might not be to everyone's taste, but it's ideal for home cinema.

Throw in the fact that the clever magnetic mounting options allow you to fit the satellites just about anywhere and you have a very flexible proposition. The mounts are clever because they can either sit on a tabletop, or fix to the wall with a single screw. There's even an option from Cabasse for ceiling mounting.

Each plastic base cups the speaker in a strong magnet, so no further attachments need to be made and there's cable management for your speaker wire. The front pair look even more impressive, suspended in a very aerodynamic-looking chunk of wood. This stands on a wide base to avoid any chance of it toppling over.

The secret of their success lies in the spherical form factor and concentric coaxial layout of the drive units. There's no interference between mid and upper frequencies from the single point source, and if you get the positioning right, you can create a soundstage with good off-centre imaging.

Where floorstanding speakers tend to have a very definite sweet spot, the Cabasse sub/sat solution manages a tasty surround effect wherever you are inside the five-speaker array. This is also due to the kinetic characteristics of the satellites; the balls tilt and swivel in their cradles letting you find an angle that best fills the room.

I'm usually a grills-off kind of guy, but I'll make an exception in this case. Apart from wrecking the geometry, the floating tweeter arrangement behind the fabric dome looks incongruous suspended in front of the woofer on a steel rod. Aesthetics aside however, the design works.

With the incisive treble detail perfectly in line with the mid-range, you get a seamless delivery across the range with very little colouration. I found integration with the lower mid-bass and sub frequencies took a little longer to achieve.

As with all sub/sat solutions, it's a case of setting the subwoofer's crossover frequency at the point where the satellites hand over the lower frequencies, and with the iO2 system that's quite high – somewhere between 120Hz-160Hz. It varies with the volume, too, so the best advice is to listen in stereo mode first at your preferred volume while tweaking the frequency and level dials.

Once that's sounding smooth, to the point that you can't detect where the subwoofer is in the room with your eyes closed, then you can perform a 5.1 calibration test, ideally using a sound pressure level (SPL) meter. Cabasse recommends connecting the subwoofer via line level to the right-hand phono input and plugging it into its own mains socket rather than sharing a power block adapter.

The woofer itself, a glossy and downward-firing fellow, is a definite step up from the Santorin 21 supplied in the entry-level Eole 2 package. Again, it stands on its own plinth and is rear-ported, but has a more powerful 250W amplifier inside driving a larger 10in woofer. It reaches lower frequencies than the 21, too, and I found it had no problem driving a large cinema room. The trick here is tuning it to match the feisty satellite speakers.

With their 93dB sensitivity, the sats produce plenty of volume using a moderately powerful AV receiver like my Marantz SR6003, so these aren't demanding speakers. Starting in stereo mode with some classical music courtesy of Vivaldi, the 2.1 configuration shows how broad and open the iO2s can be – strings soar and percussion hits home with a chesty thump.

The trebly balance means you might want to adjust your tonal controls if you have a room with hardwood floors and a live-sounding acoustic, or you'll end up with your rock music sounding just a little too edgy.

The incisive top-end and punchy subwoofer combo definitely works better with big movie soundtracks, where the floating tweeters and intricate mid-range drivers do a fantastic job of picking out subtle surround effects and fine detail. It also brings clarity to the dialogue channel that is so important in a 5.1 setup.

With the Blu-ray pressing of District 9, for instance, all the lines are clearly delivered, despite the film's hectic documentary style. Meanwhile, the Santorin subwoofer generates plenty of deep-reaching low-end, so you don't miss out on any of the thunderous blasts from the hilariously powerful alien weapons.

On the downside, there is a danger of losing synergy between the upper and lower frequencies if the sub isn't perfectly matched and it's a fine balance.

The Cabasse iO2 system delivers a coherent soundfield packed with clarity, and is capable of bringing out the detail hidden in movie soundtracks.

The styling and build quality, too, is superb. But the bright, forward nature of its audio means that while I'd recommend this £4,100 setup heartily, you should get an audition first.