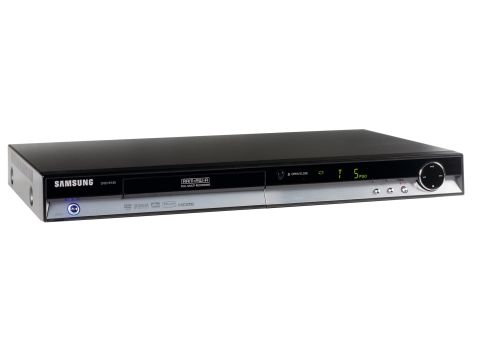 A decent enough DVD recorder, but one that doesn't do enough to stand out in any particular area

On paper, the Samsung DVD-R145 looks like it may well be a sturdy enough DVD recorder. For starters, it features excellent disc compatibility, being able to record on all types of DVD media, including dual-layered DVD plus-R and DVD-R discs.

Maximum recording time is a useful eight hours in the lowest-quality mode and there are five basic recording modes to choose from as well as a Flexible Recording setting to ensure you get the best picture quality on your remaining disc space.

Editing functions are plentiful on DVD-RAM and DVD-RW VR discs, but much sparser on other platters, so you must choose between editing power and compatibility with other DVD players. Chapters can be added manually or created automatically (DVD plus-RW discs cannot be set for auto-chaptering, however).

Connectivity is very good, with the HDMI output heralding the provision of video upscaling to 720p and 1080i levels.

The input Scart can accept an RGB signal (critical to get the most from a digibox) and there are RGB Scart and component video outputs as alternatives to HDMI. At the front, a DV input is very welcome.

The deck is quite easy to use, with a well-designed onscreen menu, but the remote lets the side down a bit.

It is uncluttered, but that's because the 'Anykey' button takes on a lot of functions, including the zoom, which would be better off with its own button.

Also, changing the HDMI output (you can dive into a menu or press the 'progressive' button behind the front panel flap) requires stopping the disc you are playing, so it isn't easy to compare output quality.

In action, recordings in the one-hour mode are very good. The deck seems to add a level of extra contrast on a looped through signal from a Sky box, and this is captured on recordings, but it isn't distracting.

The two-hour mode sees quite a step down in quality, with moving objects creating some noticeable artefacting and broad swathes of colour tending to shimmer.

Four- and six- hour modes deteriorate further but the picture remains quite smooth and even the eight-hour mode does not display the jerky 'strobe' effect.

At this setting the picture is reminiscent of a VHS tape (which is a bit pointless on a DVD recorder) but it will do for non-critical recordings.

Audio quality is good via the digital outputs, while video upscaling does not seem to add much of anything to pre-recorded DVDs. Inspecting a zoomed image in frame-by-frame detail doesn't reveal any dramatic differences between a regular signal and an upscaled one.

This is a solid enough recorder, but one that doesn't stand out in any particular area. As such it faces stiff competition on the shop shelves, where a DVD recorder needs to deliver more than the basics to be in with a shout of capturing our imagination.