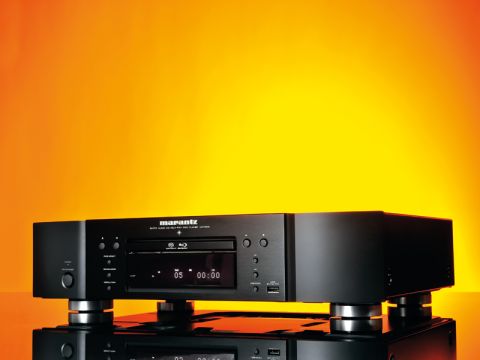 The term 'universal', as applied to pretty much anything in home electronics, is generally only valid for a few minutes these days. No sooner is a 'universal' player on the market than some new format, specifi cation or system is launched which is beyond its ken.

That said, we can't actually think of anything this player won't do. The big news, the thing that makes it more universal than last year's crop, is 3D video support. Maybe that'll take off, maybe it won't: we're more interested in audio performance. But it does a very decent job of handling anything else you can throw at it.

It does support AAC, though, which isn't so common and gets a tick from us as we would love to see this superior system replace MP3.

On the other hand, it's not limited just to playing discs. It has a USB socket on the front (which handles uncompressed files, hurrah, as well as the usual compressed formats) and an Ethernet socket at the rear through which it can talk to your home network, allowing it to play files from on your computer or Network Attached Storage and also play files on YouTube.

There's no option to play internet radio, so that's something for the next generation to add, and we can't see any way to play wax cylinders...

Pardon? Ah, yes, thank you. When CD was launched it was a very simple system that stored audio in a fixed format. You put a disc in, it was recognised, you played it. Subsequent generations have added functionality because the boffins could and the marketing bods could sell it.

Functions are great, but they make things complex. You can't set this player up fully without a TV screen attached (fair enough, it is marketed as an AV unit first and foremost so it is likely to live near a screen in most applications) and even then it's a little bewildering.

The instruction manual is heavy enough to use as an offensive weapon and isn't the best we've seen by a long way – frankly some of it is as clear as mud, but the information's in there somewhere.

But in most situations you can still plonk a disc in the tray, press 'Play' and simply listen. Marantz has taken the issue of loading time seriously and it's down below 10s for all the disc types we tried, which is an improvement on the 12-15s we've seen from several recent machines.

But there are some bizarre operational details. Not the least of these is that pressing 'Play' doesn't necessarily make the machine play. If it's been idle for more than about a minute, the transport spins down (like most new-format transports, it keeps spinning for a while after one presses 'stop'), after which pressing any control button simply brings it back awake. One must then press the button again to make it actually do something useful. Annoying? Very much so!

Another detail which we bet most users will miss is that the downsampling applied by default to the digital output seems to affect the analogue output, too. It's understandable that the digital output is converted down to 48kHz when high-sampling sources are played, because if this is connected to a typical AV receiver the latter probably won't accept high sampling rates.

But surely the stereo audio output (at least) should derive the benefits of extended bandwidth? In practice, if the default settings are not changed, the analogue output is limited to 24kHz bandwidth – and the downsampling filter has rather poor performance, too, with deviations from a flat response (technically referred to as 'ripple') that are about the worst we can remember seeing from any digital equipment ever.

Inside the case are five stereo DAC chips, necessitated by the 7.1 channels of surround sound plus the stereo pair. The DAC in question is described as a '32-bit' part and indeed its manufacturer uses the same term in the data sheet. Yes, it accepts 32-bit data but in no meaningful sense does its performance approach 32 bits of genuine analogue precision – not even 24, indeed, though it is one of the closest to that.

Video processing stuff takes up even less space and is distinguished by an impressively large heatsink sitting on top of the main processing chip.

Between that, the rest of the circuits and the (switch-mode) power supply, quite a lot of heat is generated and it is dispersed by a fan, which runs at all times. It's fairly quiet but by no means silent, and simply adds to a growing list of reasons why we don't expect this machine to appeal to many audio purists.

The disc transport makes a moderate amount of noise, mostly an indistinct whooshing sound and we were rather disappointed to find that ours rattled like anything when playing Blu-ray discs. We soon shut it up with a judiciously placed cotton wool bud, but we really hope that doesn't affect more than this one sample.

Now that we've painted a slightly gloomy picture of this machine's audiophile potential, what does it actually sound like?

Thankfully, it's not half-bad. We spent quite a lot of time playing CD on it, simply because the vast majority of the world's digital music discs are CD. It's got a good sense of timing, good detail and plenty of extension in both bass and treble.

You can find a slightly more solid bass, perhaps, in a few mid-range CD players and the higher frequencies don't quite have the crystalline purity of that in some of the better dedicated players around, but we enjoyed our time with it nonetheless, once we had put it in a place where its fan and transport noise were (just about) inaudible.

With SACD and DVD-A discs, once we had set things up correctly, we felt the sound was just a shade more open and detailed, with better depth and greater precision in stereo images.

The sample Blu-ray music disc we tried (hey, how many have you got?) was encouraging in some ways, with excellent definition, but was also somewhat frustrating in offering only a 48kHz sampling rate. 96/24 DVD-A recordings, including a couple of in-house productions, made more of an impression.

Of course, one of the big attractions of this player is the comprehensive multichannel output. 7.1-channel audio is rare going on non-existent, but some 5.1-channel productions sound impressive in a rather classy AV-based system.

But 'impressive' is rather the key word here: not many surround recordings seem to have been made with natural spatial qualities in mind and it's probably not an accident that most audiophile-oriented high-resolution players are stereo-only. Bluntly put, we had the most convincingly musical experiences exclusively from stereo discs, in any format.

We did appreciate some very fine video images, too! The USB input seems to match disc-sourced sound, given that its maximum sampling rate is 48kHz. Data-compressed (MP3 etc.) files from USB or disc sound about as good as they ever do, and in fact we admit that some AAC-encoded files at higher data rates had us fooled that we were listening to perfectly respectable CD sound.

From an audiophile perspective, there are plenty of disc players around which at least match the UD7006 for sound, but in a mixed audio/video playback environment, the UD7006 makes a lot of sense and is actually very good value.