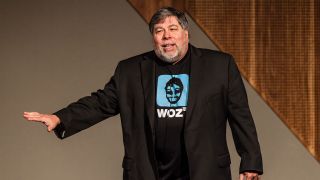 While the biggest talking point has been Michael Fassbender’s portrayal of the titular character, Apple co-founder Steve Wozniak also featured in the trailer, with funnyman actor Seth Rogen in the role.

Talking to Bloomberg, Wozniak discussed his thoughts on the trailer, saying that he quite likes it overall, despite some inaccuracies regarding how he is portrayed in the film.

The trailer starts with a dialogue between Wozniak (Rogen) and Jobs (Fassbender), where Rogen’s Wozniak asks “what do you do? You’re not an engineer. You’re not a designer. You can’t put a hammer to a nail. I built the circuit board. The graphical interface was stolen. So how come, 10 times in a day, I read Steve Jobs is a genius? What do you do?”

“I don’t talk that way,” Wozniak said in regards to the scene, further stating that he “would never accuse the graphical interface of being stolen. I never made comments to the effect that I had credit (genius) taken from me.”

Wozniak went on to say that he doesn’t recognise himself in the trailer, but that he expects dramatic liberties to be taken in the film, as “accuracy is second to entertainment in a movie like this.”

Though he has reservations about how he is depicted in the film, Wozniak says that he’s honored to be portrayed by an actor of Rogen’s popularity.

It’s all good in the hood

While the film does take some liberties with regards to the events it’s based on, Wozniak says that “the lines I heard spoken were not things I would say but carried the right message, at least partly.”

He also said that the trailer’s depiction of Jobs is more or less accurate, stating that he “felt a lot of the real Jobs in the trailer, although a bit exaggerated,” and that it made him “almost cry remembering it.”

Wozniak, who consulted with Sorkin before the script was written, says he looks forward to seeing the film when it is released in Australia (where he lives) on October 8 (the film comes out in the US on October 9 and the UK on October 12).