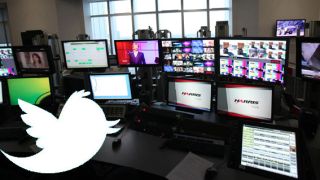 Twitv - Basically you don't exist on the web unless you are offering up your own videos - just ask Bieber - so it comes as no surprise that Twitter is considering its own reality TV series. We can't wait to see which Hollywood Star will make a guest appearance as the fail whale. [CNET]

Conical bravo - Talking of live telly on the internet, Madonna fans are in for a treat as her Paris Olympia concert is to be streamed live on LoveLive's YouTube channel. She'll no doubt be singing Like a Virgin Media Superfast Broadband, and This Used To Be My Playbook. [PR]

Twitoh - Celebs have feelings too people, and what better way to show that than have some of them read out those hurtful troll tweets that they receive on a daily basis:

Mario/Maria - Nintendo has lifted the lid on its 'CSR inspection', basically giving us a look behind the scenes at what its factory workers' lives are like. "At times dormitory buildings at some factories have not been divided according to gender, but we will persist in addressing this challenge," said Ninty. Killjoys. [Nintendo]

Fact - Ever wondered where all those lovely editors at Wikipedia source their facts from? Well, now you can check out the top sources for attribution on the online encyclopaedia. The fact that Facebook is in there worries us a bit. [Gizmodo]

Albarn one - Blur are still, like, totally relevant and by no means a relic of the '90s, and how better to prove it than by teaming up with Spotify to offer up a Blur app. This is by no means a low. [PR]

Olympic lasers - Apparently you're not allowed to be a British writer and not mention the Olympics at least once in every article, so how about the news that scientists from BAE Systems have been helping out our modern pentathletes with their high tech lasers. Even nicer – they have offered out the testing device to any other team that wants a go. Aww. [PR]

3D printing is awesome/awful - You know how we always tell you how technology is neither evil nor good – merely a tool for humanity? Well here's 3D Printing in action to produce a homemade mixtape (yay) or, alternatively, a working gun (boo). With great 3D printing power… [Slashgear/Engadget]

Firefoxy - Mozilla has announced that Firefox Add-on downloads have crossed the 3 billion mark. Apparently more than 85 per cent of users have addons installed with an average of five per user. Stat-tastic.[PR]

Book it now - We're big fans of this particular Kickstarter project Out of Print that is aiming to offer you a cover for your tablet that is based on iconic hardback books. Should it raise its funding then it's aiming to make covers for the Nexus 7, Kindle Fire and the iPad. [Kickstarter]