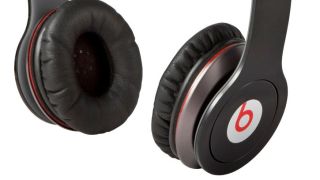 Beats - you may have heard about them

Ear ear – Amazon is clearly a company on the ball, so I'm sure you'll join us in congratulating it on spotting a brand new trend that you may not have been aware of: that people are buying chunky headphones with Urban artist branding. ''It seems like the days when musicians simply made music are behind us", said Andrew Milliken, electronics director at Amazon.co.uk. Yep. Well, well behind us. [PR]

Fair play - So should any of the Pirate Bay founders pay their massive fines you might expect the money to go to the musicians that have, you know, lost out on cash through piracy. But no, the money will go to the IFPI whose sole purpose is to help those musicians and the record labels. Perhaps they should send themselves a threatening letter about it. [

Silver service - You're no doubt already enjoying the Olympics, with London 2012 providing thrills, spills and an opportunity to be genuinely pleased for people who finish third behind China and Russia, but Sky would like to remind its subscribers that you could be watching our heroic failures in HD on 1080i HD on dedicated channels from 450 to 497 on their satellite boxes. [PR]

Spradio - Despite what you may have heard, rumours of the radio star's death at the hands of video have been greatly exaggerated, and on the same day as announcing some impressive numbers, next-gen music giant Spotify has announced that it has updated its Android app with Spotify Radio. [PR]

What's up? - For those lucky enough to get their hands on the shiny, thrifty and awesome (shriftsome?) Google Nexus 7 there may be some shriftsome accessories on the way, with a leaked slide suggesting that a leather case and a dock are coming soon. Of course the UK is still waiting for the first official case, so don't hold your breath. [Droid-life]

Copywrong – A French retailer is apparently trying to copyright the Anonymous logo and its slogan so it can stick it on clothing and accessories. Angering a bunch of very clever hackers might not seem like such a great plan to the rest of us, but hey ho. [Wired UK]

Fine and dandy - There's nothing quite so self-righteously furious as a parent who bought their little precious an 18-rated computer game then found it wasn't appropriate for their 11-year-old. So the government has now tackled the problem by bringing in even more stringent rules on retailers who sell the games…to kids. Obviously this is a good thing, just missing the main problem. [Register]

Chairly ridiculous - We got an interesting stat through from Sky today from a poll it conducted that suggested 5 per cent of the population had bought a lazy boy-type chair to watch the Olympics. Now this is clearly ridiculous so we queried the data. The reply? Actually it's only 4.5 per cent. So only the 3.1 million sales then. What is it they say about lies, damn lies and statistics? [PR]

Prinze among men - Lovefilm has signed a deal with Miramax which will see subscribers get access to the likes of Quentin Tarantino's Kill Bill, Robert Rodriguez's Sin City and, possibly, Freddie Prinze Jr in Down To You. [PR]

ConText - Amazon chief Jeff Bezos thinks that text only books are here to stay." I don't think, for example, that audio snippets would make Hemingway better," said Bezos. 50 Shades of Grey on the other hand… [The Appside]