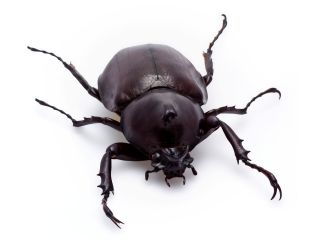 We won't lie to you. It's been a very weird week. According to a new report, chicken parts could soon be used as alternatives to jet fuel. Or perhaps algae, or even Jatropha – an odorous subtropical plant nicknamed "black vomit nut". Nice.

It's all part of a multi-faceted attempt to replace the 19 million gallons of kerosene burned by US carriers every year. The US government, biofuels industry and a platter of other patrons are pushing the plans to help reduce the carbon footprint of air travel.

It doesn't end there. Scientists at the University of California, Berkeley, also set the tone by exhibiting a remote-controlled Rhinoceros beetle at a conference in Sorento, Italy. Six electrodes were planted into its brain and muscles, enabling researchers to control the beetle's wings and pilot it around the room.

So far, so strange. Turns out the trusty beetle cyborg is capable of carrying well over twice the 1.3kg mass of the equipment on its back – a fact that will no doubt be fully utilised by the US Defense Advanced Research Projects Agency, which is funding the project.

And it seems that talking to your botanical buddies just went next-gen. This week saw the launch of a new gadget that, oddly, allows you to interact with your beloved Begonia through Twitter.

Comprising of sensors and a microchip, the Botanicall kit wires your plant up to the internet, sending regular health updates to Twitter, such as: "'URGENT! Water me!'". And we thought the Tweet-aWatt was bad enough…

Meanwhile, Oyster cards eat your heart out: there's a new public service in town. Well, in Venice at least. Instead of paying the current 1 euro fee to visit a public toilet, forward-thinking tourists can now buy one-week or day bathroom-pass online as part of the city's Venice Connected card.

Apparently caught-short tourists are an all-too-familiar sight down the back-streets of the city. You really will need to think ahead, though – the purchase has to be made at least 15 days before use.

"Islam is the light"

And over in Indiana, a mother was shocked to discover that a game for her 8-year-old daughter's Nintendo DS, Baby Pals, contained the hidden message: "Islam is the light".

"All of a sudden my daughter looked at me," Rachel Jones told News 10, "and… said, 'Mom, I think my baby said something.' And so I played it back, and it says 'Islam is the light.'"

That's pretty weird, but it's even stranger that Jones has come across the message before. Against the odds, her 4-year-old daughter's baby doll relayed exactly the same message only a few months ago.

If you think the last seven days have been somewhat sketchy, spare a thought for the 18-year-old Colorado man tasered four times by police on Wednesday – while on acid. Yeesh. Bad times.